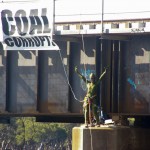 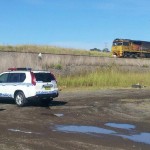 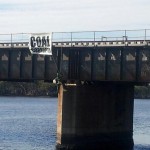 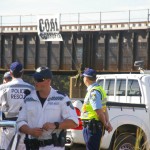 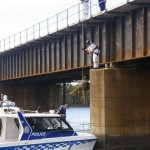 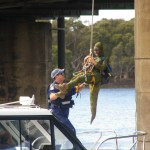 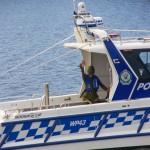 15 protesters from the Maules Creek coal mine blockade have taken their campaign to the other end of the coal chain this morning, stopping a coal train in Newcastle.

Protesters approached the stopped train as it entered the Kooragang Island coal terminals from where Whitehaven Coal intend to ship coal mined at Maules Creek. One of the protesters is suspended from the railway bridge, blocking access by the train.

The protesters say that the Maules Creek coal project has been implicated in the corruption scandal sweeping NSW politics, and that construction on the project should cease pending a judicial inquiry. They have also called for a broader inquiry into the political influence of the coal lobby in NSW.

“There is a cloud of corruption over the NSW coal industry”, said Helen War, spokesperson for Front Line Action on Coal.

“Two mining ministers of the former government were found corrupt last year. The new government’s last mining minister Chris Hartcher resigned in disgrace after his offices were raided by the ICAC. These men presided over the granting of scores of coal mining and exploration licences in NSW.

“Three coal exploration leases were cancelled in the wake of last year’s ICAC inquiries, with Maules Creek named in the Operation Spicer inquiry currently under way.

“Evidence before ICAC alleges that Nathan Tinkler was making illegal donations to NSW politicians at the same time he was aggressively lobbying for the approval of the Maules Creek mine. This is a scandal, and just the latest episode in the long, dodgy history of this mine. Last year two former directors of Tinkler’s mining company were prosecuted for not disclosing National Party donations at the time the application to mine Maules Creek was being assessed by the state government.

“The Maules Creek coal mine should never have been approved. It would destroy thousands of hectares of irreplaceable endangered bushland. It is unwanted by local farmers, whose health and livelihoods stand to be irreversibly impacted.

“We have always suspected this mine could only have been approved with special treatment, and there is now more evidence of that being the case. We call on Premier Mike Baird to restore public confidence in the approval process for the Maules Creek mine, and commit to a judicial inquiry.”

“A broader inquiry into the political influence of the coal lobby in NSW is also needed. Coal is corrupting our democracy, and it’s time put a stop to it.”

UPDATE 11:10am: Police have arrived at the scene of the action.

UPDATE 12.15pm: Our Gecko has been lowered from the bridge and arrested by police.