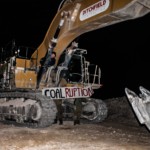 TODAY: Simon Wells, 55, of the Sunshine Coast has halted work in Whitehaven Coal’s proposed Maules Creek mine site in the Leard State Forest by chaining himself to construction machinery.

As disgraced businessman and former Maules Creek mine investor Nathan Tinkler prepares to face questioning from the Independent Commission Against Corruption (ICAC) this week, Simon Wells, school teacher and musician, is determined to see real change in the way mines are approved.

“It’s wrong on so many levels. We should be winding down, not expanding coal mining, it’s been commenced and allowed to continue with dubious lawful authority.”

The Leard Forest Alliance have called for a judicial inquiry into approval of the mine, citing the latest allegations from ICAC regarding questionably lodged political donations to the National Party and shady political decisions made in their wake as reason enough to halt all construction works on the controversial project. Former Deputy Prime Minister and National Party Leader Mark Vaile is the current Chairman of Whitehaven Coal.

“The Leard State Forest is irreplaceable – once it is gone, we lose it forever. Are we really prepared to sacrifice this rare habitat, teeming with biodiversity, based on decisions made in the context of corruption that the ICAC investigations have uncovered?” said Phil Evans, Leard Forest Spokesperson.

Simon Wells added, “It damages the local forest and its wildlife, the local residents, and the economy of the surrounding townships. Ultimately it contributes to global warming.”

Phil Evans continued, “We are calling on Premier Baird to show he is serious about cleaning up coal mining approval processes in New South Wales. A failure to halt construction at Maules Creek before any alleged wrongdoing by Tinkler is properly investigated is tantamount to business as usual, and represents no change to the previous administrations’ attitudes.”

Over 150 people have been arrested this year protesting Whitehaven Coal’s Maules Creek mine.

UPDATE 11:30am: Simon has been cut off and arrested.