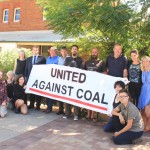 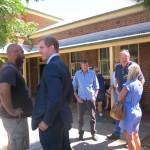 – GUNNEDAH, 04 February 2015: Farmers, Gomeroi Traditional custodians and environmentalists are holding a vigil at 9am today out the front of the Gunnedah Courthouse in solidarity with former Wallabies captain David Pocock. Pocock is facing charges related to peaceful protest activity in opposition to Whitehaven Coal’s Maules Creek mine in the Leard State Forest.

The coal industry continues to face fierce opposition in the North West, from people who care about agricultural land, climate and country. Yesterday Premier Baird snubbed the Maules Creek community in a FiFo visit to Whitehaven’s project.

Rick Laird, Maules Creek Farmer and Leard Forest Alliance spokesperson said, “After meeting David and locking on to a huge digger with him for 10 or more hours, I came to realise he is a fine young Australian with very high moral values.

“His family over in Zimbabwe were farmers, and he one day wants to indeed return to the land. He supports the plight of farmers, and their constant battle against big coal, to protect water tables, agricultural land, cultural heritage and the general health of farmers and the environment.
“What a champion, and leader of a generation of young people who can see the world through young eyes. Without a doubt the world’s climate is changing. We both agree that there is no place for foreign shareholders and companies running over communities in rural Australia.”

The campaign to save the Leard State Forest has swelled into a huge opposition to the expansion of the coal export industry. This comes in the lead up to a mass convergence on February 13 which coincides with Whitehaven’s plans to clear sections of the critically endangered forest.

UPDATE 10:30AM: Emma and David have entered the court for the hearing.

UPDATE 11.10AM: Emma and David sentenced with a Section 10 (no conviction) and no penalty. The magistrate said “Pocock was of exceptional character and that protest activity is likely to continue at Maules Creek” Emma Pocock is available for comment