FiFo Premier in bed with the mining industry 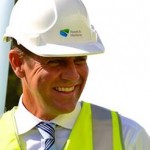 MAULES CREEK, 3 February 2015: This morning Premier Mike Baird flew into the Maules Creek mine site bypassing the local community who last week came out strongly against the scandal plagued project. Last Friday, the Maules Creek community hall was crowded with local farmers and Gomeroi traditional custodians who discussed the negative economic and social impacts of the mine.

Premier Baird flew into the mine site by helicopter to open the partially operational mine – which by Whitehaven’s own admission is only 87% complete.

Leard Forest Alliance Spokesperson Murray Drechsler said, “The campaign against the Maules Creek project has grown from strength to strength – despite all that has been thrown at it. This latest snub by Premier Baird – and his National Party allies -shows how out of touch he is and in March out of office.”

Baird’s latest move comes as the Leard Blockade camp – running for over two and a half years – makes preparation to launch a mass event to combat Whitehaven’s scheduled forest clearing in the Leard State Forest.

“Thousands have already come – and hundreds more have made the pledge to come and support locals as they protect this irreplaceable forest. This mine continues to be a beacon for the rising swell of opposition to the expansion of the coal export industry in Australia,” Mr Drechsler continued.

Tomorrow prominent rugby union player David Pocock will be in Gunnedah after being arrested last November taking direct action. Over 300 people have been arrested in an huge display of opposition to coal expansion in the Leard State Forest.