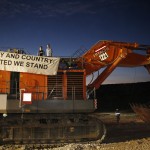 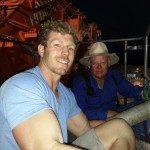 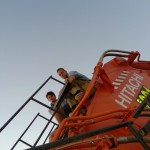 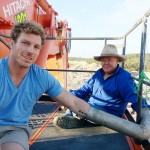 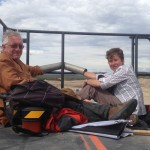 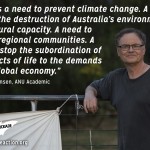 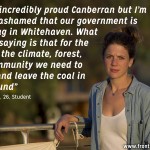 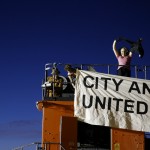 MAULES CREEK, 30 November 2014, In an extraordinary show of solidarity 8 Canberrans have responded to a call for help from the Maules Creek community impacted by Whitehaven Coal’s Maules Creek mine in the Leard State Forest. The group have swarmed a ‘super digger’ operating in the Maules Creek project site and are joined by 5th generation Maules Creek farmer, Rick Laird and high profile former Wallabies Captain and Brumbies player, David Pocock.

Maules Creek farmers are struggling with the effects of drought exacerbated by climate change. Local farmers are facing a double blow on water, holding deep concerns about the impact of the new mine on underground aquifers and their access to irrigation water.

David Pocock said “I believe it’s time for direct action on climate change, standing together as ordinary Australians to take control of our shared future. It’s inspiring to join other Canberrans and Rick Laird in their call for the ACT Government to quit their investments in Whitehaven.”

Local farmer and long time vocal opponent of the mine Rick Laird said “I’m out here for the sake of my 5 children. The mine is about 4kms from the school they go to and I worry about their future and their health growing up next a coal mine that is always blasting and kicking up dust.”

The Leard Forest Alliance, comprising of local farmer groups and prominent environmental groups, are calling for immediate halt to construction work on the Maules Creek Mine whilst there is a full inquiry into how this scandal-plagued project was approved by NSW and federal governments.

Leard Forest Alliance spokesperson Phil Evans said, “This mine has been a rort from word go – and this is why prominent Australians, farmers and city folk are flocking to the area to oppose this symbol of corruption and climate disaster.”

There have been over 280 arrests since the establishment of the Leard Blockade camp in August 2012.

UPDATE 07:45AM: Local Police have arrived on site.

UPDATE 3:30PM: David Pocock and Rick Laird have been arrested after coming down from the machine and other activists are still occupying the machine.

UPDATE 6PM: The remaining activists have all been arrested and take to Narrabri police station