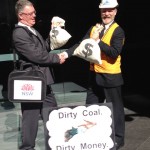 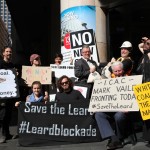 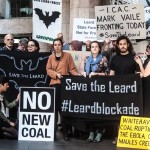 SYDNEY — A group of protesters have gathered outside the Independent Commission Against Corruption (ICAC) this morning as Whitehaven Coal chair Mark Vaile is expected to have his day in the witness box.

The Leard Forest Alliance, a group of environmental organisations and concerned members of the public, is calling for a full audit into the approvals process of Whitehaven’s Maules Creek coalmine, and for the company to wait until that audit has been completed before proceeding with mine construction at the site. The alliance is also calling for a ban on donations from coal mining companies.

The former deputy prime minister, Mark Vaile, was also the chair of Nathan Tinkler’s company Aston Resources, whose sole asset was the Maules Creek coalmine, before the company was merged into Whitehaven Coal.

Evidence tendered at the ICAC reveals that allegedly prohibited donations passed between Aston Resources, Boardwalk Resources, Chris Hartcher, the Free Enterprise Foundation and eventually the NSW Liberal Party, and that ministers and other parliamentarians who received donations allegedly assisted various Tinkler developments through the planning process.

“There are too many questions surrounding the Maules Creek approval process, and the allegations we have heard from ICAC have shattered the confidence of the community,” said Leard Forest Alliance spokesperson Blair Palese.

“NSW Premier Mike Baird must hit pause on construction work until those questions are answered and it’s clear that the dealings that have been brought to light by ICAC have not played a role in the Maules Creek mine approval process.”

“We believe the political donations ban should be extended to mining companies so that the days of hidden influence can be put to rest,” Palese said.