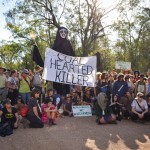 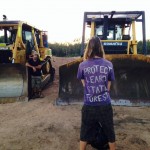 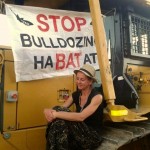 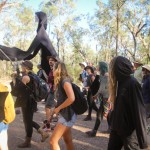 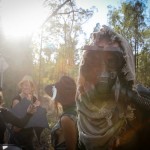 – MAULES CREEK, February 2015: The 250 strong Bat Attack convergence have taken their protest festival to the Leard State Forest with a rally declaring that they will ‘never let this happen again’. The protest comes as Whitehaven Coal recommences clearing in the critically endangered Leard State Forest.12 people have locked down bulldozers destined to clear the forest, and 200 people rally at the gates to the mine with a giant Grim Reaper puppet and signs reading “Coal is Dead”.

The gathering are calling for a halt to forest clearing activity, and are sending a clear message to Mike Baird: “never again.”, The project has been plagued by protest for over two years now, with over 300 arrests, including fifth-generation farmer Rick Laird and former Wallabies captain David Pocock.

Spokesperson for the Leard Forest Alliance, Ros Druce, said “ There is a state election in six weeks, and Mike Baird needs to know that the unfinished business of mining reform in New South Wales will haunt his Government until it is resolved.”

The Leard Forest Alliance have consistently called for an overhaul of mining approval processes and an end to  mining company [political donations in the wake of the approval of the scandal plagued Maules Creek mine project.

“There are precious remnant woodlands proposed to be cleared for coal mines elsewhere in New South Wales, and other communities fighting large new mines as big as this one.  The thousands of people that have come to Maules Creek will now spread out across the state and they will never let the coal industry and the New South Wales Government do this again.”

Police and Police Rescue are on the scene at the Bulldozer site.

UPDATE 10:30AM: 7 people have been arrested – 6 released without charge and 1 taken to Narrabri Police Station. 8 people are still chained to the bulldozers.