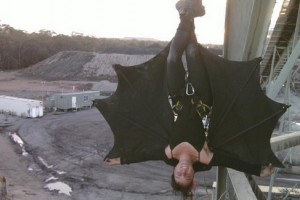 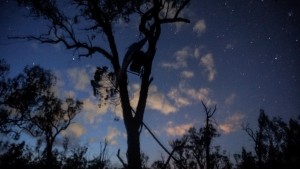 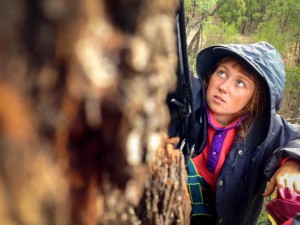 As International Women’s Day 2015 rolls on we’ve been reflecting on all the incredible women involved in this campaign – and how we can build more progressive feminist politics on the front lines in Australia.. no hard and fast answers but some great reflections on the Leard Blockade campaign ..

And below a day by day account by Erin Butterworth written earlier this week on the actions to stop clearing and the women taking direct action to defend this critically endangered and irreplaceable forest.

Post Bat Attack saw action from Front Line Action on Coal ramp up against the bulldozing of the forest and the ladies have been leading the fight!
Whitehaven’s Summer clearing of the Leard State Forest Whitehaven began on the 15th of February, but was significantly impacted by the masses of people that walked on and locked on during Bat Attack. Feeding from the energy and fire of Bat Attack fresh and passionate people stayed on to continue the fight on the front line to stop  the clearing.

The bulldozers roll in devastating the forest. Destroying the beauty that only seconds before stood peacefully. Well, as peacefully as possible on the brink of a brutal gaping hole in the ground. Yet, as these machines roar in, if you listen carefully the footsteps quiet and soft of Juliet and Luca, Tiffany, Kelly, Melissa and Christy, can be heard walking through the night ready to lock on. There will be more!

Amid packing down the Bat Attack site, working out the next steps for Front Line Action on Coal, and supporting Gomeroi in their continued battle to save vital sacred sites and access their country to perform ceremony, members of FLAC have been busy making action. It has been a full sick hectic time. 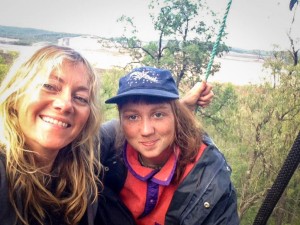 “I’m scared for our future, and I feel we need to take a stand now. I’m mainly doing this for my Dad, I know how proud he would be.” Luca Lamont.

Friday the 20th, Juliet and Luca, mother and daughter took action.The journey for these two is incredibly personal and emotional. Empowered in their journey to stop the insanity of corrupt and destructive coal mines, and to remember Tom, partner and father who passed away last year, they entered and occupied the forest from a treesit in an ironbark. The sit was located on a ridge overlooking the mine. With wide smiles the pair huddled together for warmth through the drizzle and the night. Sitting up there for twenty hours they caused a stop to clearing for an entire day!
Read full release here: http://leard.frontlineaction.org/never-give-said-tom-protest-leard-forest-clearing-continues/

“Even if it feels like a pointless fight sometimes and you feel like it’s not working, we need to keep fighting to the end and never give up, for only when you give up have you really lost.”  Juliet Lamont

The actions continued on Saturday night. Ecologist Tiffany taking a stand in the forest. Tiff was able to use the same tree as Juliet and Luca had used the night before. The sit was tensioned to the cherry picker that had to FLAC’s advantage been left next to the tree. She climbed under the harsh glare of floodlights to the sit, where she held tight to causing more delays to Whitehaven who were forced to stop clearing for over 24 hours. Being an ecologist Tiffany has deep appreciation for the ecosystems that are being destroyed. 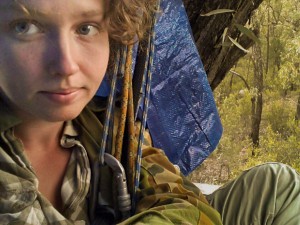 “Short sighted greed and corruption are rapidly destroying country, culture, precious life and ecosystems, which have existed for hundreds of thousands of years. Out of love and respect, we must fight against this loss, against this genocide and ecocide.” Tiffany Harrison

Monday and Tuesday were the days which the Gomeroi people had negotiated access to their land with Whitehaven coal and the NSW government in order to perform ceremony. Front Line Action on Coal stood outside the gate on Monday in solidarity. Once again they where shamefully rejected by Whitehaven security from visiting a site they had fought eighteen months to get onto. The repeated stress and rejection Whitehaven, alongside other mining companies such as Idemitsu and, now, Shenhua have caused Gomeroi people is shocking, and beyond comprehension. Sacred sites are, and will continue to be destroyed unless more is done now to pressure the government and these companies.

Gomeroi elders are urging the wider community to write letters to Greg Hunt MP and other politicians to put a permanent protection on Lawlers Well. 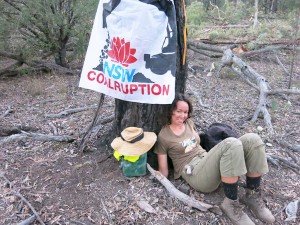 “This dodgy project will leave us with nothing but a hole in the ground, which they have no plans to rehabilitate. The economic benefits by which Whitehaven justifies this project are a farce, and I will not stand for it.” Kelly Purnell

Come Tuesday night, everyone was ready for action. The smiles and steadfast will of Melissa and Kelly, ready to lock on to stop some dozers created a buzz of action. Andy was also keen and occupied an ironbark in a treesit.

For Melissa and Kelly the early hours of the morning became a race with the sun to get locked on. The duo inhabited a partly cleared zone with only a few old habitat trees remaining. Melissa and Kelly had to thrust their hands into the earth to lock to tree root systems on the ground – pipe buried within concrete dug into the base of the tree. As the sun rose higher the two felt nervous and excited. A rumbling crashing unnatural sound erupted as a dozer could be seen coming through the area. Everything came into harsh and extreme focus. This is happening and it is happening now! Melissa and Kelly defended the forest for the entire day – stopping bulldozers clearing critically endangered habitat. 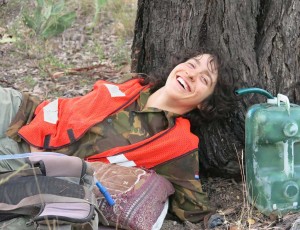 “No people without land. It’s time that we respected the earth that we depend upon” Melissa Freer

After arriving to attend a court hearing in relation to her last action, Christy decided, in the face of these destructive dozers she was going to lock on again, to halt this insanity for as long as she could. This bold and gutsy move kept the momentum of FLAC at Maules Creek  going, and even stronger.
Read the full release http://leard.frontlineaction.org/continued-resistance-clearing/ 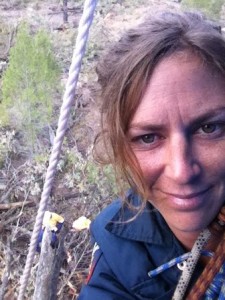 “The Leard State Forest contains some of the last 0.01% of the critically endangered gum woodlands left in the world and it needs to be protected against coal mining. Whitehaven’s ‘offsets’ are a total sham, and in no way hold the same ecological value. They don’t even have to fill in the gigantic black hole that will remain”. Christy Horton

Seven people in seven days locked on. Six of the seven were passionate and courageous women that had to stand strong against taunts of the majority male mine security and police rescue. Strong against the dozers destroying the forest before them. Strong against the systems around them discouraging them from taking powerful, peaceful action to protect this earth.

As long as unjust, unsustainable and unnecessary  clearing and mining continues. So too does FLAC. With FLAC groups setting up in Airlie, Brisbane, Sydney, Newcastle, Melbourne and many more; support networks around Australia the fight against coal is building. Powerful non violent direct action by all has not slowed at Maules Creek. Drawing from the strength of these women FLAC will continue to grow!