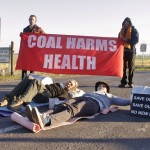 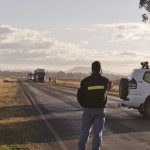 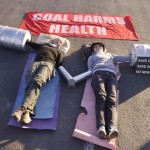 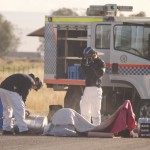 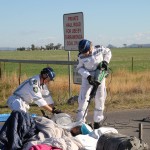 Today two women have locked themselves to barrels filled with concrete blocking access to Whitehaven Coal’s Tarrawonga Mine supported by a group of 20 protesters. Mildi Palmer, 33, and Lindy Boyko, 54, are both concerned about the health of the community as a result of increased coal mining in the Leard Forest area.

Ms Palmer, an environmental health officer and mother was inspired to take action when she heard a Maules Creek local “speak of the devastating effects on the community.”

“I want to know I did my part to leave a better future for my daughter and the future generations of this area.”

Ms Boyko, a paramedic and grandmother, said that she is also concerned about community health and “want my grandchildren to have a future.”

Leard Forest Alliance spokesperson, Phil Evans said, “With over 18,000 tonnes of coal dust about to be blown out across the community, you have to worry about the impact that will have on local health. At every stage, coal harms health, whether you are digging it out of the ground, transporting it, or burning it as fuel, the effects are far reaching and devastating to young and old in our communities.”

The protesters also called for an immediate stop to Whitehaven Coal’s Maules Creek mine, citing concerns about corruption in the planning approvals that allowed the project to proceed.

Mr Evans added, “Coal mining in Maules Creek places profit before health, was approved in a cloud of corruption, and is destroying the very fabric of this once quiet community. We can’t let these questionable government decisions continue. We need a royal commission into the planning processes that allowed the NSW government to approve dodgy mines like Whitehaven’s.”

Two months ago a group of 5 doctors were arrested near Maules Creek citing similar concerns about the health impacts of coal mining in the area.

UPDATE 8:10am: Police Rescue, stationed in the area at taxpayer’s expense to protect Whitehaven Coal assets, have arrived on site. More to come.

UPDATE 9:45am: Police Rescue are still working on trying to cut off the lock on devices that are holding up coal trucks to Whitehaven Coal’s Tarrawonga mine.

UPDATE 10am: Police Rescue have freed Lindy’s arm from one of the barrels. She is still attached to Mildi by a concrete elbow lock, and Mildi’s other arm is still in a barrel. Those trucks aren’t going anywhere fast!

UPDATE 11am: Mildi and Lindy have been arrested and are being taken into custody. More details to follow.