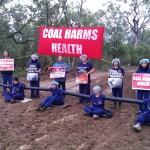 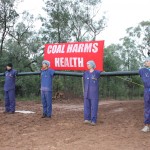 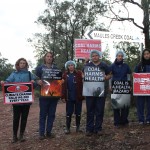 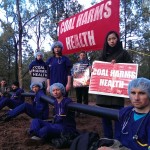 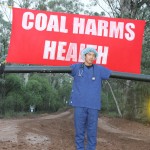 A group of medical doctors and medical students calling themselves “Medics Against Coal” blocked the main entrance to Whitehaven Coal’s Maules Creek Project this morning, protesting plans to clear half of Leard State Forest to make way for what would be one of the largest coal mines in Australia.

The proposed mine is expected to produce 13 million tonnes of coal every year which, when burnt, poses serious health threats to both local and global communities. Dr. Harry Jennens from the group said that “doctors have a duty to care for the health of individuals and communities. The urgent health impacts of climate change have compelled us to take action.”

Whitehaven’s coal mine will foul the air and water around Maules Creek, will spill coal dust all the way down the railway line to Newcastle and then damage the health of those who live around the coal-fired power plant that burns it — and that’s not to mention its greenhouse gas emissions and their devastating impacts on global health.​

Coal pollution contributes directly to four of the major killers in our society: lung disease, lung cancer, heart disease and stroke says Dr Ingo Weber, BMBS, FRACGP, FANZCA. The Maules Creek Project will form a mega mine-complex with two adjacent mines, which together will release thousands of tonnes of dust onto adjoining farmland.

Worldwide, coal pollution is the cause of tens of thousands of premature deaths annually. Medical evidence suggests that there is a significantly increased rate of death among populations living near coal mines and coal-fired power stations.

Coal burning is also one the primary drivers of climate change. The Maules Creek mine is estimated to produce greenhouse gas emissions equivalent to about 30 million tonnes of CO2 per year. Leading medical institutions like the Lancet, the British Medical Journal and the Australia Medical Association have identified climate change as the biggest health threat of the 21st century.

“The Maules Creek Project is expected to operate for 30 years,” said Dr Weber. “This proposal and others like it fly in the face of current medical recommendations and must be abandoned in favour of safe alternatives.” 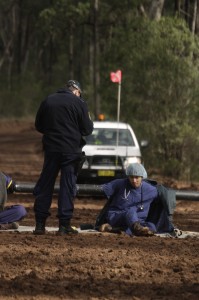 grounds by protesting against the largest new coal-mine in Australia.

Meanwhile, as doctors protest at Maules Creek, hundreds of customers of the Big 4 Banks — the primary financiers of the Maules Creek Project — are publicly closing their accounts in cities and towns right around Australia today. Dozens of doctors and medical students are among the divestors.

UPDATE 8:45am: Police have arrived onsite with 2 paddy wagons. Medics are still blocking access to mine.

UPDATE 12:00pm: Medics against Coal have been arrested by the police.

PHOTOS: All photos may be reused by media outlets. High resolution available from https://www.mediafire.com/folder/9uee880fbx2zd/COAL_HARMS_HEALTH_-_Sat_3rd_May