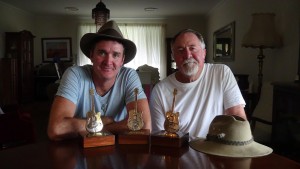 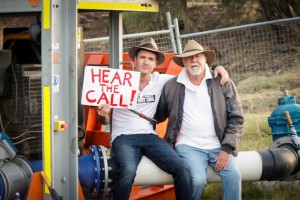 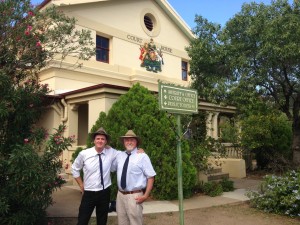 A number of friends who have taken action to save the Leard faced court today. Everyone who was heard today received Sec – 10A with no conviction or fine.
Amongst them was Country Music legend, Luke O’Shea and his Dad.

Charges against country music star Luke O’Shea, 45, and his father Rick, 71, have been dismissed — with no conviction or fine — after the pair faced court in Narrabri earlier today.

Luke and Rick faced charges of enter and remain on enclosed land with Luke receiving an extra charge of hinder work (Crimes Act) s545B(1)(iii) after their participation in a peaceful direct action protest against Whitehaven’s controversial Maules Creek coal mine in January this year.

The pair locked on to Whitehaven Coal’s water pump on the banks of the Namoi River at Maules Creek. The pump is used to draw water from the river for use in mine construction and to wash coal and is on the site where Rick spent his childhood.

“I’m proud to have stood with my father alongside the community of Maules Creek whose livelihoods, homes and health are at risk because of this mine,” said Luke O’Shea.

“Australian country musicians have a strong tradition of standing up for people in the bush and that’s exactly what I was doing.

“As a father, a musician, and a school teacher and I need to be seen to walk my talk, so I can look my kids in the eye and say I did everything I could to give Australia a better vision for the future.

“Through my actions, I’ve tried to highlight how coal mining wastes huge volumes of water. The aquifers and river systems in our key agricultural region cannot mathematically sustain this.

Luke’s father, Rick O’Shea says, “Water is the lifeblood of country Australia and right now huge amounts of fresh, clean water is being sucked out of the Namoi River to wash coal. I couldn’t stand by and do nothing.”

Luke and Rick took action just days after Luke won three Golden Guitars at the Tamworth Country Music Festival in January this year. Luke filmed the video for his song “Sing You Up” at Maules Creek and dedicated it to “the brave, peaceful and passionate people putting their lives on hold protecting what we all love”.

More than 350 people have been arrested for taking peaceful direct action to protest Whitehaven’s Maules Creek coal mine.