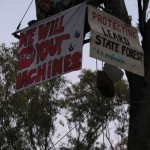 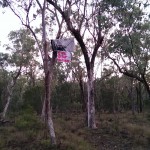 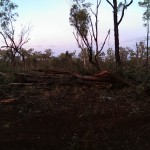 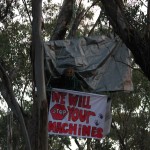 The first major clearing of Leard State Forest for the controversial Maules Creek coal mine has been halted this morning by protestors that are suspended from the trees that are threatened with clearing.

Less than two weeks ago, the NSW Department of Planning and Environment changed the Biodiversity Management Plan for the Maules Creek project, allowing Whitehaven to begin their major clearing for the first open-cut pits in late Autumn and throughout winter, when many animals species are in hibernation, and vulnerable to injury and death from the bulldozers.

Maules Creek woman, Roselyn Druce is at the protest this morning and said, “Things are going to come to a head quickly if they keep trying to clear this forest during winter, they shouldn’t be there, and we will be doing everything in our power to stop them. The NSW Environment Minister, Rob Stokes, needs to intervene and give the wildlife of this forest a fighting chance.”

A blockade of the site has been underway for four months, and over 150 people have been arrested holding up work on the coal project because of the impact the mine will have on Leard State Forest and Aboriginal cultural heritage and the contribution the coal export industry makes to global climate change.

The company behind the mine, Whitehaven Coal, acquired the project during a merger with Nathan Tinkler’s Aston Resources in late 2011. The chairman of Whitehaven, Mark Vaile, was chair of Aston during the time when Maules Creek was first proposed and Tinkler’s companies were allegedly making improper political donations. Tinkler told the ICAC last week that it was Vaile that solicited donations from Tinkler and associates to the NSW National Party.

Ms Druce said, “We know the decision to approve this mine was wrong, but the system has failed us, and so we have had to take this extraordinary action to blockade the project and fight to save the forest.

“It has been very moving to see people come to this little community from around the country and make sacrifices to protect this area. Now that Whitehaven are seriously trying to clear the forest, I hope more people come and join the blockade. We’ve stopped them for today, but until the Environment Minister steps in to prevent this winter clearing, the protests will continue.”

Photos will available throughout the day here: https://www.mediafire.com/folder/pncj24l8lvv00/photo