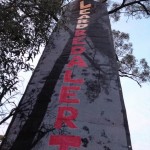 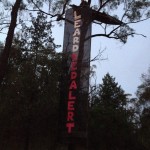 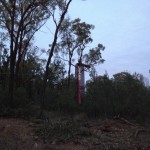 Major tree clearing in Leard State Forest for the Maules Creek Coal mine will be interrupted by protestors for a third day today, as blockade numbers swell in response to Government failure to respond to calls for the clearing to cease.

This morning, a 24-year-old woman is suspended from a platform that is attached by cable to the threatened trees, preventing bulldozers for Whitehaven Coal from clearing part of the forest for an open-cut coal pit.

A management plan for the mine previously prevented clearing at this time of year, but was changed for Whitehaven by the NSW Department of Planning and Environment two weeks ago.

Leard Forest Alliance spokeswoman Roselyn Druce said, “We are here because of a comprehensive failure across Government to uphold any standard of environmental protection in Leard State Forest. Over 150 people have been arrested trying to stop this terrible mine in the last four months because the rules have been bent to breaking point for Whitehaven Coal and we’re fed up with it.”

Yesterday, the NSW Opposition and NSW Greens called for a halt to the clearing during the cold months, to protect wildlife that are in hibernation, and cannot escape. The NSW Environment Minister has not yet acted on calls for Whitehaven cease work in the forest during winter.

Ms Druce said, “Where is Environment Minister Rob Stokes? Will anyone from the Government ever come out here to see the result of their craven decisions to let Whitehaven Coal run amok in this forest?

“Since we put out a call to action at the beginning of this week, many more people have joined this blockade. We want the NSW Government to intervene, but if they won’t, we will fight Whitehaven Coal for every inch of this forest.”

Video footage of the forest clearing is available here: https://www.mediafire.com/folder/1bn9u4xj1ej9x/29th_May_2014

Photos will available throughout the day here:
https://www.mediafire.com/folder/pjzdyfkt2sc57/30_May_2014