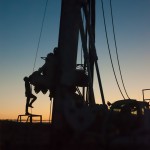 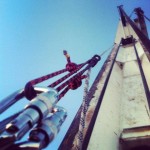 Photo on the inside. Michael Poland ascends to great heights to save the Leard State Forest. 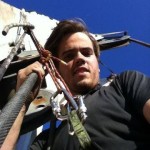 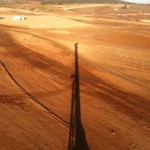 Where has the forest gone? Part of the forest lies in ruins thanks to Whitehaven.

Two people have immobilised a drill rig today used by Whitehaven for their controversial Maules Creek coal mine site situated in the Leard State Forest.

Michael Poland, 21, has scaled a 20m high drill rig and Christina Hobbs, 30, has locked herself to a nearby dozer. This has happened in the midst of a massive police operation that has seen Maules Creek locals targeted for random searches of vehicles and numerous road blockages causing unwarranted delays.

Ms Hobbs, a food security economist, said, “Its time to stand up for the rights of Australian farmers, the future of our agriculture, and our climate. It is economically scandalous to destroy prime agricultural land and river systems for the short term profits of coal barons. Our politicians have failed to stand against big coal, but this week we have shown that ordinary Australians will.”

Mr Poland, a GetUp! employee, said, “this mining development, this government and the police, by enforcing unjust restrictions, are acting to protect economic benefit of a few mining magnates above the basic human rights of the community. They are maliciously endangering our land, our water, our climate and even a local farmer’s right to go to church.”

Leard Forest Alliance spokesperson, Phil Evans, said, “Why should the local community be inconvenienced while Whitehaven Coal carry on business as usual?”.

“The approval of this project has been a farce from the start and has never taken into consideration the community’s opposition. In light of the political turmoil around Whitehaven and other mining projects, including the ICAC investigation, the only logical response is for a Royal Commission into the mining approvals process.”

09:25am: Police arrive on site. The contingent includes: 1 police rescue, 1 riot squad, 1 squad car and 2 divvy vans. This over-reaction shows the massive mobilisation and how ineffective this presence is against peaceful, community civil disobedience.

10:00am: Police have cut Christina off of the dozer after 4 hours and arrested.

13:00: Michael was brought down off the crane and arrested after 7 hours.