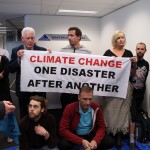 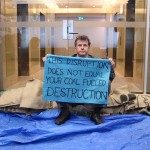 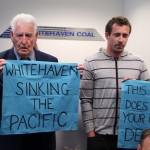 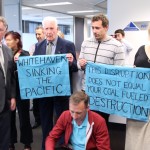 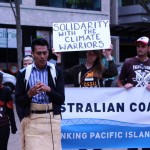 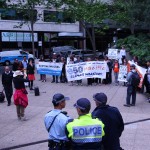 50 people have descended on Whitehaven Coal today, with 10 people occupying the Sydney office in support of the fight of Pacific Islanders who have come to Australia to stand against the fossil fuel industry. The action follows the blockade of the Newcastle Coal Port last Friday, where 150 people in canoes blockaded coal ships for several hours.

Milañ Loeak, a Pacific Climate Warrior from Marshall Islands who has joined the action, has welcomed the support of Australians for their cause.

“Climate change has had very real impacts on people’s lives in my country,” she said. “When I was a child the sea was a constant a steady feature of island life. But with climate change is now a force to be feared. The Islands are frequently buffeted by impacts of climate change with the sea level rising, droughts affecting the northern islands and king tides flooding homes in the south.”

“The Pacific Climate Warriors came to Australia to bring the message that climate change is real, and it is hurting us now. We came here to stand up to the fossil fuel industry that is recklessly destroying our homes.

“But we know we can’t do this alone. That is why we welcome the support of our brothers and sisters in Australia who are participating in this action today.”

“Whitehaven is currently building the largest new coal mine in Australia. This mine, sitting in the environmentally sensitive Leard State Forest, will result in the same amount of emissions as the entirety of New Zealand’s energy sector every year for the next thirty years. Whitehaven is exporting climate chaos on the Pacific Islands.

“We are here today to say enough is enough. The construction of this mine must stop now.

“The small disruption we have caused here today is to give Whitehaven Coal a sense of the climate destruction they are fueling across the Pacific.”