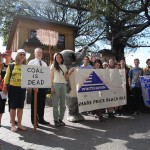 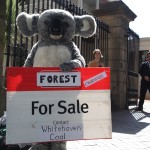 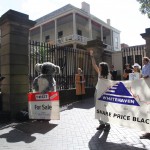 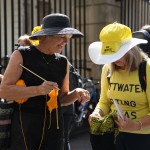 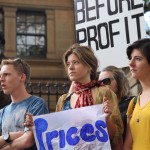 Media Release put out in conjuction with our Leard Forest Alliance partners.

SYDNEY, 30 October 2015: Protesters have again converged for controversial coal miner Whitehaven Coal’s AGM in Sydney. The group of 50 have staged a mock ‘clearance sale’ pointing to Whitehaven’s poor performance on the stock market and profitless growth.

“It is painful to watch Whitehaven continue to bleed its shareholders dry as it persists in sinking literally billions of dollars in this doomed coal investment,” said Charlie Wood, Campaigns Director of 350.org Australia, an organisation helping to lead the global fossil fuel divestment movement.

“We have seen the Norwegian Sovereign Wealth Fund– the world’s largest of its kind– shed billions of dollars worth of coal investments from its $900 billion fund this year and we have seen Sydney University -.a Whitehaven shareholder – pledge to decarbonise its holdings over the next few years. With over 450 institution worldwide divesting from coal, oil and gas and major banks ruling out funding for future coal projects, it is a clear sign that the end of coal is nigh,” said Ms Wood.

The structural decline of seaborne coal markets suggests a bleak future for the coal industry. Chinese coal imports are down 30% in the year to date 2015 on the back of a 5-6% year to date decline in Chinese coal consumption. Indian coal imports collapsed 27% year-on-year in the month of September 2015. Japanese coal imports have declined 4% in the last six months. Peabody Energy (the largest American listed coal company) this week reported a net loss for the last three months of US$305m and its share price collapsed 21% in a single day as a result. All suggest the world has permanently changed for the global coal industry.

Whitehaven’s share price opened at $1.06 down from lofty heights of $6.46 when the Maules Creek project was first approved.

“The pressure is mounting from people right across Australia and world leaders like President Obama for a moratorium on new coal mining and financing. With the UN Paris climate negotiations kicking off just next month, Whitehaven better embrace the new status quo of clean energy or it and its shareholders will be left behind,” concluded Ms Wood.

Whitehaven and its controversial Maules Creek mine project have been a favoured target by activists due to the severity of the mine’s impacts on Indigenous sacred sites, the Leard State Forest and its endangered flora and fauna, the local farming community, and the climate. The mine was the target of the longest running coal mine blockade in Australian history and prominent Australians like Wallaby David Pocock and country music star Luke O’Shea were among the thousands who joined the sustained campaign of non violent direct action.