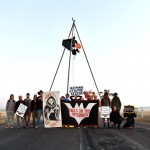 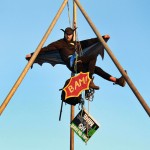 -MAULES CREEK 31/10/2014
Kicking off a weekend of action against Whitehaven’s controversial Maules Creek coal mine, a concerned citizen has scaled a tripod, blocking access to Whitehaven’s Tarrawonga haul road, blocking access for trucks trying to leave Tarrawonga coal mine. This comes as people from around the country converge at the Leard Blockade to defend water, climate and our democracy from Whitehaven coal.

Phil Evans, 33, a climate campaigner with 350.org has today put himself on the line to draw attention to Whitehaven dodgy dealings and destruction of our water and climate.

Leard Forest Alliance Spokesperson, and tripod activist, Phil Evans says,” I’m here to call ‘trick or treat’ on Whitehaven coal. Whitehaven need to be held responsible for the destruction of the community, water and the climate.”

Due to Whitehaven’s Maules Creek mine, the aquifers are predicted to drop by up to 2m. Previously during drought the agricultural community has not had water for their livestock and their farms. The Maules Creek mine, as the largest new coal mine under-construction in Australia, will contribute significantly to climate change causing further droughts for the local community and instability of global proportions.

“We hope the NSW parliamentary inquiry into the planning process will send the Maules Creek project back to square one, if any of the allegedly corrupt relationships between Aston executives and senior politicians from both sides have found to influence the approvals process in anyway.” said Mr. Evans.

Whitehaven’s planning, approval and construction processes have been plagued by questionable dealings and clouds of corruption. The multiple problems of the planning process have been brought to the attention of the NSW parliamentary inquiry into planning by community groups.

“The state ICAC has raised very serious concerns about the undue influence of coal on our democracy, but it has not gone far enough. The Leard Forest Alliance is calling for work to stop on the Maules Creek project, and an audit of the planning and approval process that allows Whitehaven to continue with this atrocity. We need a federal level ICAC and we need to take our democracy back.” said Mr. Drechsler.

“The time of coal getting special treatment is over. The corruption has got to end. It is up to all of us to reclaim our voice, and democracy” said Mr. Evans.

There have been over 265 arrests this year as part of the ongoing community lead campaign of peaceful civil disobedience against Whitehaven Coal.

UPDATE 7pm: After 11 hours blocking the haul road, Phil was removed from the tripod by police.