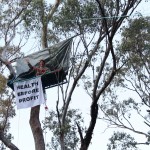 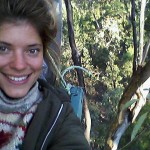 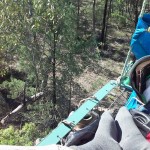 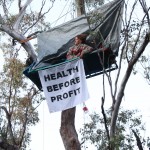 TREETOP VIGIL REACHES 72 HOURS; ‘UNLAWFUL’ BULLDOZING CONTINUES Veterinary nurse Kate Warren, 23, has taken up residence in a treetop vigil in an area of forest marked for clearing in the Maules Creek mine site, marking 72 hours and counting, and unveiled a banner reading “Coal Harms Health”. Protesters are calling for an immediate halt to clearing pending a legal action that is challenging the lawfulness of the last-minute change to Whitehaven Coal’s Biodiversity Management Plan. The change has seen bulldozing of the forest throughout winter already begin, despite environmentalists’ concerns over vulnerable wildlife in winter dormancy. Just yesterday the controversial Maules Creek site was subject to a mass peaceful demonstration, where 50 protesters walked on site, planted native seedlings in newly bulldozed areas that just days ago were forest, and were arrested and issued fines. Leard Forest Alliance spokesperson Helen War said, “Here we have another case where a mining company has complete disregard for the environment, and the government seems more than willing to green-light unreasonable allowances, disregarding the bigger picture of biodiversity loss.” “We’re disgusted that despite the extraordinary findings of ecologists in community audits, the precious ecosystem in this state forest is already treated as a mine site. Has Whitehaven no regard for these animals in torpor?” Ms War added, “This treetop vigil will be maintained until the law is upheld and Whitehaven Coal are barred from clearing the Leard State Forest in winter.” For further comment: Helen War Leard Forest Alliance 0431 930 428