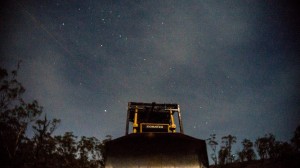 Residents of Maules Creek are so fed up with the noise coming from Whitehaven’s Maules Creek coal mine they have taken it upon themselves to conduct their own study on noise levels and the impact to the surrounding valley.

The Pilot Study suggests the Department of Planning may have failed to take due care when assessing the impacts of the mine, and states that the Department may not be the appropriate body to fix the problem.

“The DOP has created a 30-year legacy of noise pollution problems for the NSW Environment Protection Authority,” said Dr Thomas Mullaney, a member of the Leard Forest Research Node, a multi-disciplinary volunteer research group which is also conducting research on the increasing dust issues in the far north east corner of the Liverpool Plains.

According to the Study, the Department ignored the advice of the Planning Assessment Committee, the NSW Office of Environment and Heritage and an independent group of scientists and engineers who peer reviewed the mine’s Acoustics Impact Assessment.

“They all predicted that the noise impacts would exceed what was provided by way of modeled impacts by Whitehaven Coal’s consultant,” said Dr Mullaney, whose team has taken part in months of noise modeling and analysis of the operations and impacts of the mine.

“Over a quarter of our readings exceeded the limits set by the Department of Planning, and we believe the predicted impact zone is out by kilometres,” he added.

“We call on the NSW Government to initiate a complete review of the Acoustics Impact Assessment conducted by Bridges Acoustics on behalf of Whitehaven Coal, and we expect the full data to be made public, not just the modeling.”

Local residents have expressed serious doubts about the accuracy of noise monitoring data being provided by Whitehaven to the NSW Government, as the mine reports on numerous occasions ‘IA’ – inaudible.

“In this Study we recorded significant industrial noise at similar locations, and we never once found the noise inaudible,” said Dr Mullaney.

Whitehaven’s Maules Creek mine is currently operating with 3-4 super diggers, just one quarter to a third of its proposed peak operational capacity of 12 super diggers.

“If this mine cannot stay within its noise limits operating at a fraction of its peak operating capacity, it should not be allowed to intensify its operations unless it undertakes proven mitigation measures,” he added. “Additionally the mine is situated on a ridge overlooking the community of Maules Creek, so Whitehaven will have to demonstrate how they can prevent the noise travelling a long way from this high point.”

“We have news that Whitehaven is bringing in a 5th super digger next week, which will only add to the number of noise exceedances.”

“They should not be mining during the night, when they are already causing great distress to a tranquilly quiet valley which now is subject to 24/7 industrial noise. The results of this pilot study suggests the local residents have every reason to be concerned and have a strong and valid argument in calling for night time operations to be heavily restricted, if not ceased all together,” said Dr Mullaney.

The researchers say the Maules Creek experience is a lesson for Breeza, further south in the Liverpool Plains, where community members are fighting against the Shenhua coal mine development. They say positioned on a ridge, the Shenhua mine will be perfectly positioned to broadcast noise across a vast region.

The Maules Creek Noise Pilot Study and/ or the Executive Summary are available on request by contacting Dr Mullaney or on the website of the Maules Creek Community Council http://www.maulescreek.org/research/