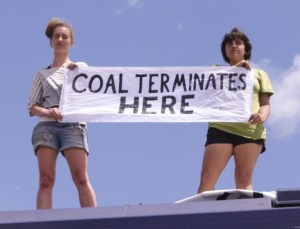 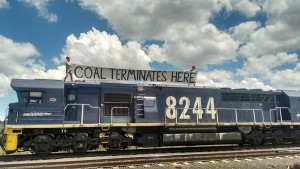 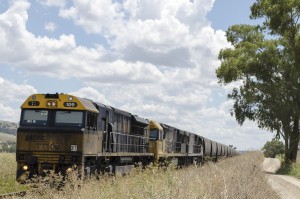 WERRIS CREEK, 21 February, 2016: Two women have peacefully occupied a fully-laden coal train in Werris Creek this morning to call for a moratorium on further coal and gas production in Australia as the world moves to restrict fossil fuels and move to renewable energy.

The action has halted all railments of coal to the Port of Newcastle, the world’s busiest coal port, and comes in the wake of moves by Indonesia, the United States, France and Vietnam to leave more fossil fuels in the ground.

“While the world is accepting that coal and gas are dying industries, my community is bearing the brunt of our government’s addiction to mining” said Roselyn Druce, a resident of Maules Creek, where Whitehaven Coal is poised to begin another round of forest clearing for open-cut coal mine expansion.

“Malcolm Turnbull told Townsville residents last week that the end of the mining construction boom ‘always had to happen’, but our communities are being left out in the lurch”.

“Coal and gas companies are devastating our health, our communities, our water and our wildlife,” said Elise Chatterton, 23, one of the two women participating in the action.

“With coal and gas prices collapsing globally, we urgently need a transition to clean energy in Australia as well,” said Monica Haynes, 30, who was also participating in the action.