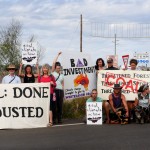 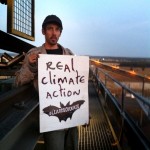 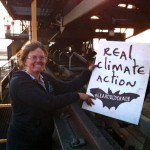 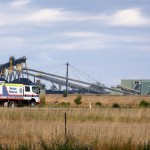 MAULES CREEK, 4 November 2014: In the second day of Leard Forest Alliance’s (LFA) “Release the Bats” Initiative against Whitehaven Coal two people have locked themselves to a conveyer belt in the Whitehaven-owned Narrabri North underground mine.

Serenity Hill, 37, and Jamie Yarnald, 32 immobilised the belt as part of a weekend of protest against the controversial Whitehaven-owned Maules Creek coal mine project. If this mine is allowed to continue its operations, Whitehaven will deplete the groundwater aquifer by up to two metres.

“Working with farms and food has shown me first hand just how important clean usable water is for our survival. So the contamination or lack of our precious water is very concerning for me,”  said Ms. Hill, a food systems analyst whose action with Mr. Yarnald halted mine operations for the course of the morning.

LFA spokesperson Phil Evans said “The IPCC report released yesterday warns that if we continue with the disregard for our environment we have shown, by 2050 we will see catastrophic climate change.” Evans called upon the NSW government to “say neigh to coal this Melbourne Cup day.”

The LFA is calling on the NSW government to stop work immediately on the scandal-plagued Maules Creek project and to conduct a full inquiry into the planning and approval methods that allowed this project to proceed.

UPDATE 8:30AM: Police and Police Rescue have arrived on the scene.

10:50: Jamie and Serenity have been arrested in the line of protecting our climate and water, and have been taken to Narrabri Police station.