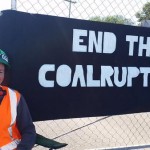 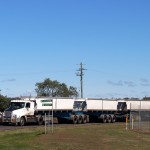 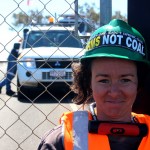 ACLAND, 28 AUGUST 2015. South East Queensland resident Kelly Purnell has locked onto the gate at New Hope’s Acland mine and halted trucks to demand a stop to any expansion of the mine and a full public inquiry into links between New Hope Coal, its parent company and the Liberal Party of Australia.

Ms Purnell said ‘Environmental Authority for expansion of this mine is a farce. The Oakey Coal Action Alliance are taking the fight of the Acland mine expansion to land court later this year and they need full support, especially after government assurances expansion would not go ahead. There can be no assessment on expansion of this mine until the corruption inquiry is completed and we have a result from the land court.’

Front Line Action on Coal are uniting with Lock The Gate Alliance to demand a halt on the Environmental Authority decision for stage 3 expansion of New Hope’s Acland mine which is being announced this afternoon. Lock the Gate has submitted an extensive report to the Crime and Corruption Commission which must be followed up immediately. This includes almost one million dollars paid to the Liberal Party, which subsequently saw the then Newman government reverse its opposition to Acland Stage 3 expansion.

Front Line Action on Coal spokesperson Chantelle McKenna said, ‘We call on the Palaszczuk government to conduct the promised extensive public inquiry into political donations linked to mine approvals. We’re calling out Palaszczuk for continuing the back flip trend that we’ve seen from the previous two successive state governments.’

Palaszczuk wrote to MP Peter Wellington earlier this year promising a public inquiry into links between political parties and the awarding of approvals. Ms McKenna continued, ‘The anti-corruption watchdog in theory has the power to thoroughly investigate these issues but we have so far seen nothing.’