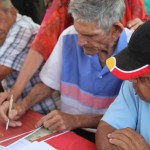 – MAULES CREEK, 11 February 2015: In the lead up to Friday’s 7th anniversary of the Apology for the Stolen Generation, the Leard Forest Alliance express their support for the Tent Embassy’s gathering in Canberra and dismay at lengthy delays by Whitehaven to give Gomeroi traditional custodians access to ceremonial sites.

“After a long and stressful struggle with Whitehaven Coal, the Gomeroi were finally able to exercise their constitutional right to conduct sacred ceremony- but it is downright shameful that it took so much struggle to get to this point.” Meret MacDonald, Leard Forest Alliance Spokesperson said.

There are many sacred sites including burial grounds in Leard State Forest, within the boundaries of both Idemitsu’s Boggabri coal, and Whitehaven’s Maules Creek mine leases.

“Mark Vaile – former Deputy Prime Minister and now Chairman of Whitehaven Coal should know better than this – why did the Gomeroi have to take this all the way to the Anti-Discrimination Board to get access to their sacred sites?” Ms MacDonald added.

“The State Government have agreed to the destruction of our communities forests and our natural assets including our water security and allowed for mining to leave as their legacy great big holes in the ground. Leaving a mess for our children and disregard for the protection of Gomeroi sacred sites and culturally important sites and objects.”

In the coming week it is expected that hundreds of people will descend on Maules Creek for a gathering called Bat Attack – in opposition to planned clearing in the Leard State Forest by the controversial coal miner.

“We, the Leard Forest Alliance, make a commitment to steer clear of sacred sites out of respect and to honour our treaty with the Gomeroi. There will be no actions at the locations where ceremony is being conducted.” Ms  MacDonald continued.

“The Leard Blockade sends its support to the many Elders and folks currently gathered in Canberra at the Tent Embassy to highlight continuing injustices against Australia’s first peoples. What is happening here on Gomeroi country and around the nation tells us there are serious problems that will only be solved when governments and corporates are made accountable for their actions.”