Saving the Koala, from Maules Creek to Japan 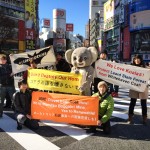 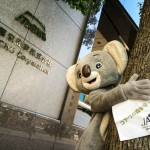 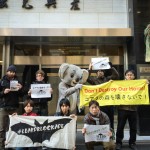 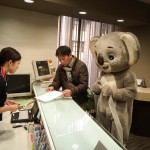 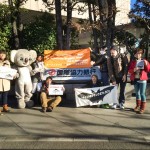 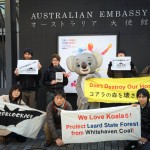 TOKYO 8 January 2015: The campaign to protect the Leard State Forest, near Narrabri, has gone global, with a group of Japanese and Australian people rallying in Tokyo at corporate offices and the Australian Embassy to call for the protection of the Koala from open-cut coal mining.

The group includes members of Japan Tropical Forest Action Network (JATAN) and Australia’s Front Line Action on Coal (FLAC) who are opposing the destruction of forest and farmlands by Whitehaven Coal and Idemitsu Kosan. Protests are taking place at the Tokyo offices of Japan Bank of International Cooperation (JBIC), Itochu, Idemitsu and the Australian embassy.

“Over the past year, more than 300 ordinary citizens have been arrested taking peaceful action to stop Whitehaven Coal and Idemitsu from destroying the Leard State Forest. Today, we are extending our protest actions to Tokyo where Whitehaven’s partner companies are profiteering from the destruction of forest and climate,” said Sakyo Noda, a spokesperson for Front Line Action on Coal.

Leard State Forest is the largest remnant of bushland left on the Liverpool Plains and includes critically endangered box gum woodland, home to 396 native species, and 34 threatened species, such as the Turquoise Parrot, Corben’s Long-eared Bat and the Koala.

“Koalas are the iconic Australian animal. Many Japanese people go to Australia to see Koalas. But the Japanese public doesn’t know the fact that our own state run bank, JBIC, and trading and energy giants such as Itochu and Idemistu are destroying koala habitat. We are calling for JBIC and Japanese companies to halt these projects to save the Leard Forest and threatened koala habitat.” said Akira Harada, spokesperson for JATAN.

Whitehaven’s Maules Creek mine is co-owned by Japanese companies Itochu and J-Power, with 15% and 10% stakes, The Japanese Bank for International Cooperation is funding Idemitsu’s loan facility for the Boggabri Coal project, in contravention to the bank’s. own social and environmental responsibility policies as well as their duty as signatories to the Equator Principles.

The group will be presenting a letter to the companies and embassy on behalf of the Leard Forest Alliance detailing the destruction of the forest as well as the major impacts on the local community, climate and indigenous heritage. The Leard Forest Alliance is calling on JBIC to adhere to its policies and withdraw its funding, and Itochu, J-Power and Idemitsu to stop work on the Maules Creek and Boggabri mines.