RIP Marion Rose: protector and friend of the Leard 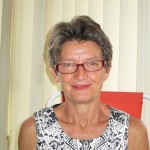 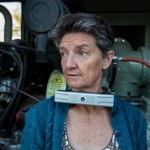 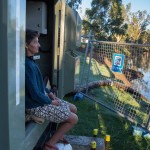 Marion Rose was a good friend of the Leard Blockade who put in a lot of energy, including two arrests, in support of the campaign. Sadly, on the 7th of May Marion passed away. She will be greatly missed as her spirit and passion for the environment is truly inspirational. We received this letter from Marion soon after the last time she visited the Leard Blockade.

Our love and thoughts are with her family and friends.

Hi from Bondi Junction. What a contrast my life is here to life at Camp Wando! Mornings at the beach, the noise of the building site next door and unimaginably awful traffic, versus sunshine, socialising and starlit nights (pierced by the occasional police spotlight beam).

I have to admit that when I first visited Camp Wando during Act Up 3 I wasn’t quite ready for what seemed at the time something like being swallowed up in a time warp. Communal living, no hierarchy, lots of hugs, vegetarian food, hippy clothes. And did I mention hugs? For someone of my age (nearly 57) it was revisiting the 70’s. I really didn’t know people still did this stuff! Maybe that’s because I had been practising law in regional NSW for most of the last 20 years, as well as being head down arse up raising kids and paying off a mortgage – the kinds of things a lot of us get caught up in.

That feeling of disorientation didn’t last long. Pretty soon we all got to work. I not only learned what NVDA stands for (Non-Violent Direct Action) I learned about how to do it. I attended workshops about the how and what as well as the why. I listened to others talk about their stories and the reasons why they were there to stand up for what is right. The diversity of backgrounds and motivations is striking. Many were there because , like me, they are worried about the effects of global warming on the quality of life of their kids and grandkids. For others it’s the environmental destruction and loss of endangered wildlife.

One of the many things I admire about the way the Maules Creek protests have been run is the commitment to non-violence. One of the workshops I attended highlighted just how many different interpretations of the term “non-violent” there are. In spite of that, and the difficulties of managing all those different attitudes when huge numbers of people are involved in an action, the strictest of definitions of “non-violence” is adhered to. That means, among other things, no property damage and no disrespect to anyone. Including police and Whitehaven employees. I really admire that. I had a chance to see the power of that approach, and its skilfull execution when I spent most of a day locked on to a water pump on the banks of the Namoi River during Act Up 3.

Contrary to my preconceptions, the range of skills present at Camp Wando is huge. The level of expertise is also astounding. When you are “locked on” you get the full benefit, so far as possible, of that skill and expertise. I have never felt better supported than I did during that long, hot day on the banks of the Namoi.

I thought, as a lawyer with lots of experience in and out of Courts, that I knew a lot about advocacy, but on that day I learned about advocacy in the context of NVDA. I sat passively and listened to a young man ,who was present to support me, have a long dialogue with a security guard employed by Whitehaven. The guard had a pugnacious, even threatening at times, attitude. Just getting him engaged in a reasonable discussion was an achievement. Keeping cool, and not letting go of the moral highground by returning his aggressiveness was also a challenge. This young man did all that and more. He may not have changed the guard’s attitudes, but maybe he planted a small seed of doubt about what he is doing and why. Either way, he did great work. As an advocate who used to get paid for my work, I was full of admiration for the level of skill and commitment on display from someone who does it for no monetary reward.

After getting to the end of Act Up 3 without being charged with any offences, in spite of my lock- on, I travelled back to Camp Wando for Act Up 4. I was fired up by the enthusiasm of people at the camp. And I missed all those hugs!

This time it was very difficult to get close to the Leard State Forest, within which the massive clearing operation is happening, because of multiple police “roadblocks”. These roadblocks are in fact checkpoints where, if you look like a potential protester, you are turned back (often after suffering the indignity of having your vehicle searched), while miners and mine contractors are waved through. The effect of this is that many kilometres of public road are now devoted to the exclusive service of Whitehaven Coal, as are the working hours of large numbers of police who are detailed to sit beside a road for the whole of their shift.

The Leard State Forest has been closed to the public for months. The excuses given about why are frankly laughable. Everyone knows it is to keep protesters out.

I questioned the use of police powers under s. 186 of the Law Enforcement Powers and Responsibilities Act, designed for use in traffic emergencies, to hinder the movements of a particular group of persons. I was arrested and will be asking a Court to agree with me that those powers aren’t properly exercised when used as they were to stop me driving on the Manilla Rd near Boggabri.

From where I sit, especially after reading the revelations coming from ICAC at present, there is a need for the community to question why it is that this dodgy development was approved, and how come the citizens of NSW are funding, at apparently huge cost, the exclusion of protesters and the general public from a chunk of NSW? What kind of benefit do the citizens get for that? Or is it someone else who is getting the benefit?