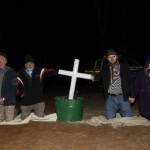 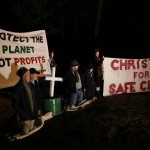 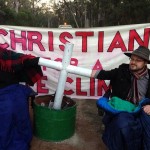 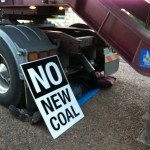 A number of Christian leaders and 25 people of varying denominations have returned to the Leard State Forest, four of whom have locked their arms to a cross made of pipe to block access to Whitehaven Coal’s controversial Maules Creek project. Many of the group hail from the Australian Religious Response to Climate Change (ARRCC), which held a protest action against the project earlier this year in March.

Concerned by the mine’s apparent disregard for Gomeroi sacred sites, several of which have already been bulldozed by Whitehaven, the protesters have chosen to risk arrest by trying to halt any further destruction.

Mr Byron Smith, Lay Minister at St George’s Anglican Church, said “Coal chokes our future, and this proposed mine particularly stinks. Out of respect and concern for all those whom it will harm, I oppose this mine.”

The Leard Blockade celebrated a victory earlier this month when, under pressure from environmental groups, Whitehaven gave an undertaking to cease clearing in the forest pending a court case in September. However construction on other parts of the Maules Creek mine continues, with the delivery of its Coal Handling and Processing Plant imminent, along with the formation of a railway spur. The spur, exclusively for the transport of coal, is a joint project between Idemitsu Resources and Whitehaven Coal.

A fifth protester, Tony Mohr, locked himself to a truck carrying the railway bridge for the ongoing construction of the rail spur, and adds to the mounting pressure on government ministers to act.

Mr Mohr said “I’ve spent the last 6 years campaigning for the carbon price. If the Abbott government tears up laws, Australians will take their own direct action. This whole project needs shutting down.”

The protest comes the same day a rally in nearby Gunnedah demands a halt to a new underground mine on the Liverpool Plains.   Mr Smith added “this mine simply must not go ahead for the future.”

226 people have been arrested for the Leard Blockade against coal mining in the Leard Forest since January this year.