MAULES CREEK, 3 November 2014: Over 80 people have set up separate blockades on and around the construction site of the controversial Maules Creek mine, near Narrabri, in a ramp up of peaceful action to prevent the mine from depressurising the water table, already under strain with climate change effects starting to be felt.

Whitehaven Coal’s Maules Creek mine has been seriously delayed by a growing movement of farmers, environmentalists and other supporters concerned that farm bores will fail due to the 600 megalitres of water the mine would use each year. The coal from the mine once burnt, will contribute as much carbon to the atmosphere as the entire New Zealand energy sector. This comes as the Intergovernmental Panel on Climate Change released a report today calling for transition to zero carbon economies by the end of the century and mass cuts in pollution by 2050.

The Leard Forest Alliance is calling on NSW Planning Minister Pru Goward to stop construction work on the mine while a parliamentary inquiry into planning decisions is underway.

Spokesperson for the Leard Forest Alliance Murray Drechsler said “The amount of water Whitehaven plans to use over the life of the Maules Creek mine would fill over 2400 Olympic sized swimming pools and this is water that should be used for food production. The IPCC report today has warned us that groundwater recharge is expected to massively drop because of climate change. Whitehaven are making a double hit on our farmer’s water.”

“The community has the courage to stand up for water and a safe climate ahead of coal and we expect Planning Minister Pru Goward to do the same,” continued Mr. Drechsler.

The mine’s state and federal approvals were granted before Whitehaven had finished their water management plan and that fact was included in a submission to the parliamentary inquiry. 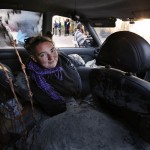 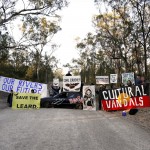 Maules Creek Mine Main access: A  woman has locked herself to the inside of a car, blocking the main access point for Maules creek mine.

UPDATE: 6:25 am Police rescue have arrived on the scene.

9:25 am  After 5 hours of holding up workers and trucks accessing Whitehavens Maules creek mine, 28 year old Susie has been cut off from inside the car and has been arrested and taken to Narrabri police station.

The Bats Take to the Trees to Block the Rail Line Construction! KAPOW! 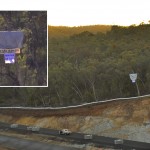 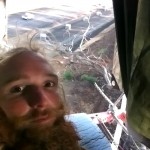 Maules Creek Mine, inside: The railway line being built inside the mine site has been blocked by a 26 year old man suspended in a tree with the rope going across the construction site.

UPDATE: 2:00pm Josh has been taken down from the tree sit and arrested. Josh’s amazing effort held up trucks and mine workers from accessing the construction site of the railway line, leading into the Maules Creek Mine. This rail line is planned to be used to transport coal out of the controversial mine site. 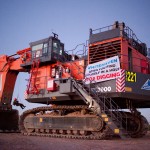 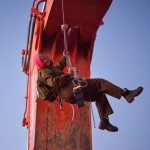 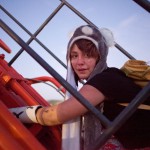 Maules Creek Mine Hitachi Digger: A 23 year old woman has scaled a Hitachi excavator inside of Whitehavens coal mine while another woman, 21, has locked herself to the huge machine used to start digging the mining pit for the Maules Creek mine.

UPDATE 7:30am :Police have arrived on site at the Super Digger.

10:30 am: Joja and Stevie have been arrested, after halting workers from using the machine for over 5 hours. The Hitachi excavator is used in the digging of the coal pit.

“We all need clean water to drink and clean air to breathe, this is essential to life. It is all of our responsibility to protect our land, water and air.” Continued Mr. Drechsler.

For Photos and Updates: https://www.mediafire.com/folder/tob94j75ttwv8/ACT_Up_6_EXTERNAL