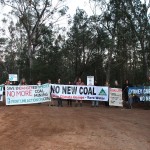 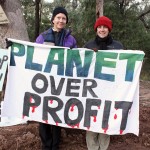 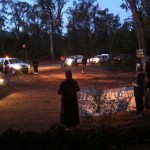 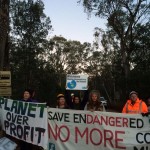 A group of 20 protesters have blocked a main access road to Whitehaven’s controversial Maules Creek coal project this morning. The campaign to save the Leard State Forest has enjoyed a brief reprieve since the destructive winter clearing was halted, but the impending construction of Whitehaven’s new coal infrastructure will doubtlessly provoke a fresh response from protesters.

A recent case by the Maules Creek Community Council, which alleged that Whitehaven’s winter clearing of the Leard State Forest was illegal, pressured Whitehaven into stopping clearing until a final decision has been made in September. “We’re glad that Whitehaven have halted this most egregious aspect of their project, but the fact remains that this mine should never have been approved in the first place,” said Ben Solity, spokesperson for the Leard Forest Alliance.

“The clearing may have been delayed, but this fight is far from over,” said Mr. Solity. “The largest coal mine under construction in Australia is still jeopardising the Maules Creek Community, Indigenous culture and the health of our climate. We are encouraging all Australians to take a stand and be part this historic campaign.”

Never before in Australia have so many people taken direct action against a coal mine. In the past six months over 220 people have been arrested. “This campaign will continue until Maules Creek is no longer threatened by coal mining,” declared Mr. Solity.