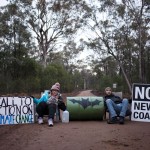 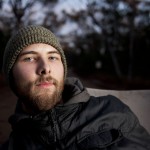 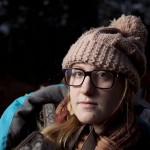 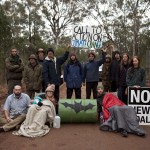 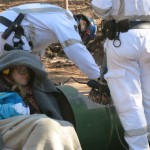 Whitehaven Coal’s controversial Maules Creek mine has again been targeted by 20 protesters this morning. Two of the protesters, Rachel Mundy, 23, and Matthew Winter, 21, have chained themselves to a barrel filled with concrete which is obstructing access to the site. They are calling for work to cease on the mine until there is a Royal Commission into NSW planning approvals and mining following months of controversy.

The protesters are particularly concerned about the impact of the mine on water resources in the area. The Maules Creek coal mine has been allocated fifty percent of the high security water from the Namoi River, despite this being one of the main water sources for farmland in the area.

Spokesperson for the Leard Forest Alliance, Murray Drechsler, said “The current ICAC investigations have shown that this mine only came to be, and continues to progress, through questionable means and back-door dealings. That a coal mine could get fifty percent of the high security water allocations in one of Australia’s most important food producing regions is incredibly concerning.”

Earlier this week, the Lock the Gate Alliance released a report highlighting the damaging effect of the coal industry on water resources in the Hunter Valley.

Matthew Winter, one of the chained protesters said “coming from the Hunter Valley, I have seen first hand the damaging effects of the coal industry. Our water aquifers are currently being depleted; our land and farms will suffer as a direct result from these coal mines. I refuse to sit and watch the Liverpool Plains become the next Hunter Valley. I am taking immediate direct action to get results.”

The alluvial aquifers in the Maules Creek and surrounding area may drop up to 2m as a result of the mine.

UPDATE 8am: Police Search and Rescue arrived on scene

UPDATE 1pm: After stopping work for over 5 hours, both Rachel and Matthew have been removed from the barrel and placed under arrest.