Over 100 take on Maules Creek mine in historic action 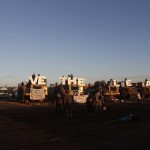 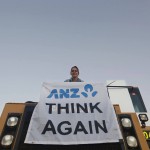 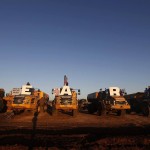 In an unprecedented act, over 80 people have walked onto the controversial Maules Creek mine site today and immobilised machines, intending to stay in place for as long as possible. They are calling upon Environment Minister Greg Hunt to revoke federal approval for the project, in light of the second part of the alarming IPCC report released today which details oncoming ecological disaster for Australia.

Projected outcomes in the report include a 4°C warming by 2100, fuelled by continued destruction of forests and the burning of fossil fuels. Despite these findings, the Australian federal government has given the green light to Whitehaven Coal’s new Maules Creek mine, projected to emit 30 million tonnes of CO2 per year – the same as New Zealand’s entire energy sector.

Leard Forest Alliance spokesperson Helen War said, “Today’s historic action is a demonstration of the strength of ordinary civilians to stand up against the destructive coal industry that is wreaking havoc on the planet. The diversity of such a large gathering of people from all over Australia sends a clear message; that Whitehaven Coal has no social license to decimate the Leard Forest.”

The Leard State Forest is home to more than 31 vulnerable and critically endangered species, including the Turquoise Parrot and Corben’s Long-eared bat, further threatened to extinction with the cumulative effects of changing climate and a lost habitat should the mine go ahead.

Ms War added, “At this critical point in history, we must look at the bigger picture and take action against the short-sighted madness of coal mine projects fuelling climate change. We will not sit and idle while industries destroy our forests, pollute the air and poison the farming foodbowl. Such a groundswell of opposition against the Maules Creek mine marks the shift towards the new normal for coal projects in Australia.”

Over 40 people have been arrested in the area since December in ongoing protests against coal mining in the Leard State Forest.

Photo credit: Bottom two photos (of Bill Ryan, 92, and view of police cars and yellow mine trucks) by Margo Kingston.

UPDATE, 9:30AM: Police have blocked access on some public roads around the controversial Maules Creek coal project site at Leard State Forest. Police are on site making arrests, citing trespass.

UPDATE, 10:30AM: 23 people have been arrested so far this morning, defending Leard State Forest from coal mining.

UPDATE, 11AM: Report of police using pain compliance and force to arrest people at site of protest against coal mining in Leard State Forest.

UPDATE, 3:30PM: 60+ arrests have been made today at the action against Whitehaven’s Maules Creek coal project near Leard Forest in north west NSW.

PHOTOS: These photos are available for use by media, view and download high-res images here.