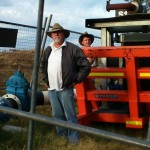 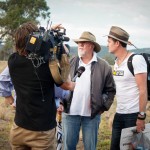 Country Music star and winner of three Golden Guitars* at last weekend’s Tamworth Country Music Festival, Luke O’Shea, has locked himself to Whitehaven Coal’s pump that draws water from the Namoi River this morning to join the community blockade against Maules Creek coal mine near Narrabri.

Mr O’Shea is joined in his protest this morning by his 71 year old father, Rick, who spent his early years living on the property on the banks

of the Namoi River where the large pump is located that the Maules Creek mine uses to draw water for its construction and to wash its coal.

Whitehaven’s controversial Maules Creek coal project has already cleared a large area of Leard State Forest, and clearing is slated to begin again in mid-February. Over the last thirteen months, over 250 people have been arrested blockading construction of the mine, including members the local farming community.

O’Shea has a deep personal connection to the local struggle. His father was born and raised near the very spot on the Namoi River where Whitehaven is now extracting water for the mine.

O’Shea said he was answering a “call to country” shared

with tens of thousands of Australians who think that farmlands, water and environment need protecting from the impacts of coal mining.

O’Shea said, “Knowing that a mining company was sucking water out of the Namoi River near where I grew up was very painful for me. Fresh and abundant water is the lifeblood of country Australia, and I couldn’t sit by and do nothing while it was being wasted on washing coal.”

“Australian Country musicians have a strong tradition of standing up for people in the bush and singing the songs that highlight the strength and mateship found during hardship, be it through war, natural disasters or taking on large multinational mining companies. It is so integral to let the people on the land know they are not alone! And hopefully – by taking this action I can provide some hope and amplify the call!”

“It was important to me to come here to Maules Creek and join the local community and farmers in their fight to protect their water, their land and their forest. The sad but beautiful fact that this property where this pump exists once belonged to my family, makes it deeply personal.”

“It doesn’t matter who you are, or where you’re from, if you believe in something, and you love the land, and the rivers, then you put yourself on the line to defend it. 100 years ago our ancestors answered the call to help their mates in strife overseas. Today, greed is the enemy and the battle is on our land. So much of rural Australia needs our help: hopefully, this action can inspire others to find out what’s really happening out here and to realise they can make a difference.”

Late last year, O’Shea released a video clip “Sing You Up” dedicated to people across Australia fighting inappropriate coal and gas mining. The track is available for viewing here: http://vimeo.com/110972359 or here : http://www.slotslovers.org

* Luke has now won three Heritage Awards in a row, over three consecutive years, the last person to do this was Slim Dusty in the 80’s.

For a full statement from Luke O’Shea, see below

“Answer the Call!” – Luke O’Shea
Let us all remember our forefathers defining ANZAC spirit & courage as they answered the call to join & help their mates already over the other side of the world fighting for their lives.
One hundred years on, the call for help and for backup is coming now from our own mates and family members, whose lives & livelihoods are being attacked in our own back yard, on our own Australian soil.
The enemy has not used bayonets or bullets to invade, but bureaucracy and bullshit. Too much of our country is covered in mining licences.

Protect our food and water. It’s simple. Why are the largest open cut coal mines in Australia coal seam gas mining being allowed to expand into our richest agricultural regions – the Liverpool and Breeza Plains?

We have been blessed with some of the world’s most fertile black soil. Somehow, upon the second driest continent on the planet, there is just enough water in the river systems and aquifers to allow the plains to yield crops which helps feeds our nation and the world. How is it that Whitehaven Coal at Maules Creek has licence now to 3 billion litres of freshwater from the Namoi River? That’s 85% of the Lower Namoi High Security Water, not being used to sustain crops or the people within the communities, but to wash coal. They’re also drawing water from local aquifers, affecting farmers that rely on good productive groundwater.
Why are my Dad and I taking this action? This is not an anti-mining statement: this is an anti-greed statement. We have family members and close friends who work in the coal mining industry and now their own livelihoods and communities are at risk and threatened due to the saturation of coal on the market

. The price of coal on the world market has decreased more than 50% within the last 18 months. Australian mines are stockpiling coal in the hope the world market prices rise. Coal mine employees are being forced to take long service leave, reduced work hours and pay cuts. We do not need another huge coal mine.

that my grandfather built with his father – on bend of the Namoi River. This place is by sad and beautiful coincidence the place where Whitehaven’s Maules Creek mine has laid a long giant pipeline that allows the three billion litres of water to be drawn from a drought affected region. That pipeline is the reason I first became aware of the region’s plight.

My responsibility as an Australian singer songwriter is to Sing Up the land and its people.

Any media attention coming my way from my recent success at Tamworth will be used to amplify the call from people on the land who are feeling abandoned and hopeless. Who will answer the call?

Two hundred and fifty people within the last thirteen months have been arrested on the Maules Creek blockade alone. These are not radical hippies – these are everyday Australians, mothers, fathers, grandparents, proud Gomeroi people who I am proud to call my friends, doctors, lawyer, religious leaders, a famous rugby player, a 93 year old Kokoda War veteran, and now me and my dad – all deeply concerned about the direction Australia is heading. We are answering the call.

Who will answer the call?

Go to http://leard.frontlineaction.org/ to answer.