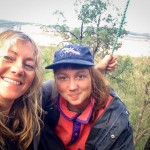 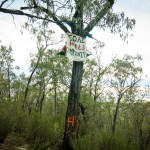 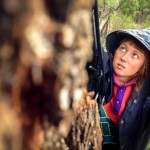 Actions continue today after a massive week of protest against the controversial Whitehaven owned Maules Creek Mine. 44 year old mother Juliet Lamont, and her 16 year old daughter Luca Lamont, have scaled a tree within the mine site to halt clearing of the Leard State Forest.

“The passing of my partner has been a massive driving force behind my need to get my priorities in order and take action against corporate and government disregard for our environment and future. Tom was the sort of man that was always about putting himself on the line for the greater good. He always believed in the need to keep fighting for our climate and for a just future,” said Juliet Lamont.

Tom Jefferson was a photographer with Greenpeace, he was in the making of an environmental documentary, when sadly, he passed away in the line of work. Tom was known to be a passionate and strong environmental activist, driven by the need to expose people to the truth about climate change and encourage them to take action.

Luca Lamont said “I’m scared for our future, and I feel we need to take a stand now. I’m mainly doing this for my Dad, I know how proud he would be.”

The action is the latest in a week of community led disruption of Whitehaven Coal’s clearing of the forest. It is the first week of a ten week window in which Whitehaven can clear what is some of the last intact critically endangered box-gum woodland left on earth.

“Even if it feels like a pointless fight sometimes and you feel like it’s not working, we need to keep fighting to the end and never give up, for only when you give up have you really lost,” said Juliet. She tirelessly continues work on Tom’s unfinished documentary.

Mother and Daughter arrested after over 20 hours in a tree

Luca and Juliet Lamont were arrested and taken into custody late last night, after over 20 hours in a tree-sit occupying the canopy of Leard State Forest, halting clearing for the controversial Whitehaven Maules Creek project.

44 year old mother Juliet Lamont was given a fine, and her 16 year old Daughter Luca Lamont, a caution. They took action in remembrance of Luca’s father Tom Jefferson, a passionate and strong environmental activist, and documentary maker.

“Every minute of the tree-sit with my daughter Luca to protect the last of the Leard Forest was worth it because its the right thing to do, the only thing to do. All families who care about the future need to join the fight now.” said Ms. Lamont