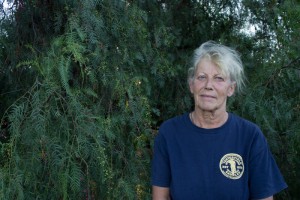 A guest post by local Maules Creek community worker and horse trainer Ann-Marie Rasmussen, who yesterday backed up her words by suspending herself from a tree in the Leard Forest, holding up bulldozers clearing the forest for seven hours.

There is a booklet that has been published called “Mining Laws in NSW”. It is funded by the government through the Environmental Trust and Environmental Defenders Office, supposedly to help people understand the law so they can protect their interests and those of the environment.

The booklet cleverly disguises the fact that when it comes down to the nitty gritty, the community does not have a leg to stand on and the environment is offered no protection whatsoever.

Well perhaps not so cleverly disguised – it states that ‘the office of Environment and Heritage OEH plays a role in granting permits to the mines; to damage or destroy Aboriginal cultural heritage’.

The Environmental Protection Authority (EPA) is responsible for issuing permits to pollute, these permits are known as (wait for it) Environment Protection licenses .

The Office of Water is responsible for issuing licenses to ‘access water and interfere with aquifers’.
Underneath this section of the booklet it also states that the ministers responsible for the relevant acts can change as can their titles and the names of the departments.

It sounds very much like a means to pass the buck when someone wakes up to the hypocrisy of it all.

OK, people change positions; but why change the name of a department? It can only be to make it more difficult to hold someone in government responsible long-term for the damage their decisions cause and to make it harder for concerned citizens to get some answers.

The government is in the process of law reforms that will make it even easier for mines to have their own way.
One that I find really disturbing is that some of the coal and CSG developments may qualify as “designated developments” and may be assessed by the local councils. This, to the uninitiated, may seem like a good thing as local is close, but in truth it is not.

The local communities in country areas are not keen on standing up and defending their rights for many reasons. Communities are divided due to the short-term benefits with jobs and donations, scholarships and the buying out of affected landholders. Landholders who have benefited financially by selling also have to sign a clause not to speak against the mines. This makes it easy for short sighted councillors to vote in favour of the mines.

We have seen this here in the Maules Creek area, where the mines gave advance payment to councils that have funded heated indoor pools, health centres and they support local sport, events and camps. Events like campdrafting have had donations to the sum of $30,000. The mines know the importance of winning locals over with generous donations that they can easily afford as long-term the mines have much to gain.

The booklet on mining law; rather than giving one the impression that the environment,water and the long-term welfare of Australians is protected; tells another story that is very disturbing.

The Strategic Land Use Policy is another example, it has three key components.
1. Strategic land use plans (SRLUPs)
2. Aquifer interference policy ;and
3. Code of practice for Coal Seam Gas Exploration

Let’s have a look at them. SRLUPs provide an overview of each region and will develop plans for each region the mines are interested in. They are looking at making plans for Central West, Southern Highlands, Murrumbidgee, Alpine and Western regions, as well as existing ones. Those plans are for areas that are now and future regions that will be affected by mining.

Despite it being said that SRLUPs have been brought into existence to protect high-quality agriculture land, the policy does no such thing. It states that SRLUPs define and map agricultural land but major mining and CSG proposals that qualify as state significant development are not prohibited on these lands.

What that boils down to is that if the mine is big enough it will get the go ahead.

It also states that ; Mining and CSG activities are known to interfere with aquifers ,through penetrating the aquifer, taking water from the aquifer or obstructing the flow of the aquifer.

The government knows the risk mining imposes on our water yet still they do not listen to the concerns we have for our future. Still they make policies to protect the mines, not the people.

They have in place a Draft Interference Policy that literally tells the mines how to get the extra approvals giving them the permission to interfere with the aquifers. OUR WATER.

Then there is the code of practice for coal and CSG. Mines have been known to break the law frequently; this does not bother them as the fines that are imposed are small compared to what they gain by breaking any rules, regulations or laws.

If a landholder on the other hand should do the same in defence of their livelihood and way of life they gain nothing, but the fines they get can be crippling. In fact the law of this land in its underhanded and deceptive way states that any man or woman who dares to defend their land is labelled a criminal.