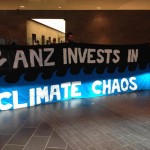 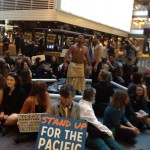 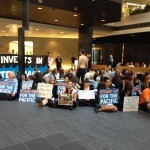 FROM OUR ALLIANCE PARTNERS: Friends of the Earth (via Quit Coal Victoria) and 350.org Australia

MELBOURNE 22ND OCTOBER: 80 individuals are today occupying the Melbourne offices of ANZ in support of the Pacific Islanders at risk of losing their homes to climate change. The group comprises Melbourne residents and representatives from a group of Islanders who have come to Australia to oppose the fossil fuel industry. Participants have arranged themselves in concentric circles in the building’s atrium and are chanting poems and testimonials about the effects of climate change.

The action follows a high profile blockade of the Newcastle Coal Port last Friday, and a series of occupations of offices including Whitehaven Coal in Sydney, the Minerals Council of Australia in Canberra and Buru Energy in Perth earlier this week.

Mikaele Maiava from Tokelau one of 30 ‘Pacific Climate Warriors’ representing 12 island nations joined the action said: “At home in Tokelau, climate change is threatening our food security, our culture, our land and our identity. The fossil fuel industry and Australia’s continued commitment to its expansion, is directly increasing that threat.

“We have come to ANZ to highlight the damage and loss that they are causing by pouring billions of dollars into the Australian coal and gas industry. As ANZ is also a member of the Pacific Island community, with branches across the region, it should understand that these fossil fuel investments are not only putting our livelihoods at risk, but also theirs.

“We are urging ANZ to stop financing new fossil fuel projects to protect our homes and our future. We know that we need to see a massive shift in capital from fossil fuels to clean energy if we are to have a chance of keeping our islands above water. What we reap now is what our children will sow in the future.”

Nicola Paris, spokesperson for the group said that ANZ was chosen because of their contribution to dangerous climate change.

“Since 2008, ANZ has loaned over $6.75 billion to coal and gas export projects. ANZ is the largest commercial funder of fossil fuel projects in Australia.

“We are here to say enough is enough. We will not stop until this bank removes all funding from fossil fuel projects and stops exporting climate chaos on the Pacific Islands.”

“This is the culmination of several actions happening around Australia this week to show the fossil fuel industry that it is no longer acceptable to profit from pollution. Actions like this will continue until the big polluters start facing up to the reality that is climate change.”