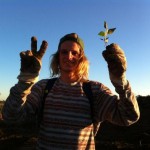 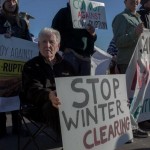 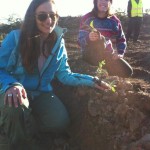 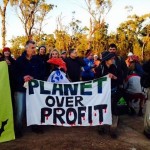 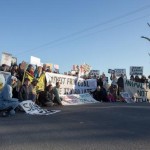 In a formidable show of strength, over 100 people, including 92-year-old WWII veteran Bill Ryan, have staged a mass protest at the site of Whitehaven Coal’s controversial $767 million Maules Creek mine project. A group of over 50 entering a newly cleared area of the forest to plant native tree seedlings. It comes as a protester passes their 48th hour in the canopy of a tree in an area earmarked for clearing. Protesters are demanding that whilst there is a legal action in progress, all clearing must immediately halt.

Late on Friday The Maules Creek Community Council filed for an interlocutory legal injunction against the company’s bulldozing of forest in winter, given the vulnerability of animals in winter dormancy. Until just two weeks before clearing began, the company’s Biodiversity Management Plan had not allowed for clearing at this time of year.

Leard Forest Alliance spokesperson, Helen War, said “Whitehaven Coal appear to be in breach of the Environmental Planning and Assessment Act. Why must ordinary citizens have to go to such lengths to halt this seemingly unlawful clearing? Minister Pru Goward should never have allowed this to begin in the first place.

“It’s dire that we must do the job of the government to protect this precious forest, but while trees are falling, we won’t be idle. We already know the age of coal is over; it will be a national shame if Leard Forest is floored in the meantime.”

Over 180 people have now been arrested in the Leard Forest and surrounding mines since January this year.

Update 8am: Coal Trucks being blocked at Idemitsu’s Boggabri mine – Idemitsu recently admitted involvement in sending spies in to the LeardBlockade camp. Whitehaven Coal and Idemitsu are building a joint rail line to service both the Boggabri and Maules Creek mines. The Boggabri mine is set to expand drastically, which will lead to further clearing of the Leard State Forest.

Update 8:30am: Police have arrived on site in the Forest. Our tree planters are doing the job of Planning Minister Pru Goward’s department and are facing arrest to stop Whitehaven Coal’s ‘unlawful’ clearing.