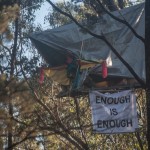 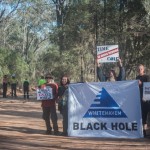 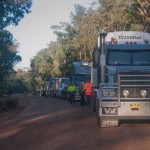 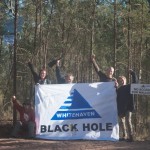 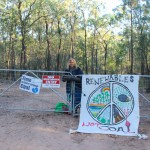 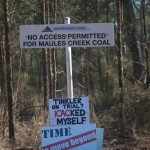 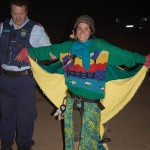 Protesters in the Leard State Forest have blocked entrances to the controversial Maules Creek coalmine site today in outrage over a last-minute change to Whitehaven’s management plan that spells disaster for hibernating animals.  A 34-year-old fisherwoman, Christy Horton, from Airlie Beach, has locked herself onto a main access gate of the mine, and a 24-year old female youth worker has climbed into a tree sit, blocking the second main access road to unveil a banner reading “Enough is Enough”.

The protesters are calling on Environment Minister Rob Stokes to intervene immediately to halt work, given the extraordinary change in permissions last week to Whitehaven’s Biodiversity Management Plan. It saw the Department of Planning and Environment allow clearing of the forest throughout winter despite the likely cost of widespread injury and death to wildlife.

Local Maules Creek resident and spokeswoman for the Leard Forest Alliance, Roslyn Druce, said, “Once again, Whitehaven has managed to worm its way out of any responsibility for the critically endangered woodland they have started to destroy. Clearing in winter invalidates the entire offset process; the premise of which is the supposition that animals will relocate to specific new habitat areas before being wiped out by bulldozers.

“That won’t happen during hibernation. This sly change forfeits the animals their basic right to life. And all this, for three months wait.”

The three-month hiatus for clearing in winter is standard practice for other coalmines operating in the area, and ensures hibernating animals are not killed in their sleep.

Chained to the gate, Ms Horton said, “I’m here taking direct action to help stop the destruction of the Leard State Forest. I feel that the Australian people have spoken but our government isn’t listening, and our last option is to take direct action.”

Ms Druce added, “Is Minister Rob Stokes aware of what’s actually going on here in the Leard Forest? Amidst ongoing corruption enquiries at ICAC implicating the dodgy nature of initial Maules Creek mine approvals, this new amendment is almost certainly an indication of greasy hands. The sad reality is, over 70 threatened and vulnerable species could be affected by Whitehaven’s winter bulldozing. This is animal cruelty at its worst. Today, on International Biodiversity Day, we are taking a stand.”

UPDATE 10:30am: Christy Horton has been arrested.

UPDATE 6:30pm: The tree sit has been lowered after 12 hours stopping Whitehaven’s work. Our parrot, Amanda Byrom, has been arrested and taken to Narrabri.