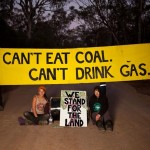 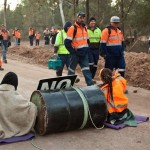 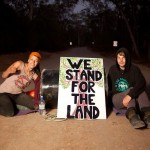 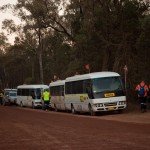 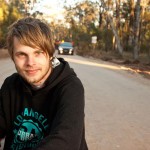 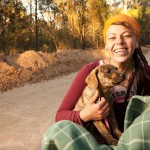 Two young people have locked themselves to a barrel filled with concrete blocking access to the main entrance of Whitehaven Coal’s Maules Creek mine in the Leard State Forest. The protest is part of an ongoing campaign against the controversial mine which puts at grave risk the over 30 threatened and endangered species that inhabit the forest.

The protestors, Serenity Reid, 20, and Jake La Rosa, 22, have both cited concern about the destruction of the Leard State Forest and impacts of coal mining on local agriculture with the construction of this new mega mine.

Ms Reid said, “The forest, the animals and the people of this area are at great risk from the industrialisation of the Leard and its surrounds. It is unsustainable, and I have come here to stand for the people and this land.”

Mr La Rosa said, “This irreplaceable forest is at risk, and I have come here representing nature, which cannot protect itself from this destructive industry.”

Front Line Action on Coal have waged a two year long campaign of peaceful, civil disobedience against the Whitehaven mine after forming an alliance with local community members who were frustrated by NSW planning approval processes that allowed the project to go ahead.

Phil Evans, Front Line Action on Coal spokesperson said, “Now that ICAC has concluded Operation Spicer, we have seen the resignation of a Premier and 10 Liberal MPs moved to the cross bench – some because of dealings with mining operations like Nathan Tinkler’s – who was part of the Maules Creek project.”

“People have lost faith in the NSW planning approvals process. We need a full inquiry into the approval of dodgy projects like Whitehaven’s, and meanwhile, we need an immediate ban on mining company donations to political parties and the corrupting influence they seem to have.”

Over 250 people, including farmers, doctors, lawyers and a WW2 veteran, have been arrested taking peaceful, direct action to stop coal mining in the Leard State Forest.

UPDATE 8:15am: Narrabri Police have arrived on site. No sign of Police Rescue yet.

UPDATE 6:00pm: Jake has been arrested and put in a wagon. Serenity is still attached as Police Rescue attempt to saw through the barrel.

UPDATE 7:00om: Serenity has been arrested and both our heroes have been taken to Narrabri to be charged. Sending in people for arrest support and will update with charges in the morning. Another day of peaceful, community civil disobedience to stop Whitehaven Coal’s dodgy Maules Creek mine!