Maules Creek mine battle goes on 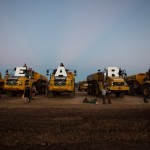 The battle to stop coal mining in the Leard State Forest is not over; will you come back with some friends to the Leard Blockade?

Great things have happened since we last contacted you. We thought we’d sit down, and fill you in on what’s happening with the Leard Blockade.

Last Thursday, Whitehaven Coal halted clearing in the Leard State Forest after the Maules Creek Community Council sought an injunction in court. It’s a significant win for the campaign, but it does not mean complete victory. In those few weeks, over 130 hectares of forest were cleared. We expect digging for the open pit to be imminent, with huge explosions echoing from the site every day.

In terms of what’s next, dug-up coal would be processed on site by a Coal Handling and Processing Plant (CHPP), which could be transported in and built any day, as it sits in nearby Narrabri. It’s the next big construction phase that needs to be stopped. A joint railway project with Idemitsu is also still charging on, whose Boggabri mine is also set to expand and clear more of the Leard State Forest.

The Leard Blockade is far from over. This community led, peaceful civil disobedience campaign has been hugely successful at stalling the progress of these mines, causing massive financial cost and time scheduling issues.

To count, there have been 226 people arrested taking nonviolent action in the Leard Forest and surrounding mines since January this year, and it’s a number that inspires. So now, while we celebrate the immediate stop to winter clearing and stand down Red Alert, there’s still an urgent call for people to come to Maules Creek and show support for the local community, the Gomeroi, and take action on climate change.

Whilst the forest is safe for now, there is much more at stake: farms, food, cultural heritage, community, and climate change.

The age of coal is over. The government is failing us, so we must act. So, when are you and your friends coming back to the Leard Blockade?

Check out this Facebook Group for more about getting involved in Brisbane: https://www.facebook.com/groups/1403289276593770/?ref=ts&fref=ts

Check out this Facebook Group for more about getting involved in Melbourne: https://www.facebook.com/groups/1402544600035318/