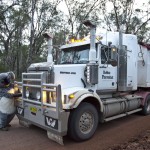 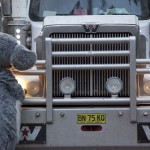 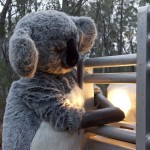 Protesters at the Maules Creek coal mine construction site have maintained their blockade overnight, and the site remains in lock-down as protest action escalates over clearing in Leard State Forest during wildlife hibernation.

This morning, a protester has attached himself to a truck on the main access road to the forest, blocking the road.

Other activists remain in place in the forest, determined to prevent any further clearing after the body of a dead bat was yesterday discovered by one of the protesters.

Leard Forest Alliance spokesperson, Helen War, said, “Winter begins tomorrow, but we have already found evidence that Whitehaven’s clearing in this forest at this time is killing wildlife. This should be all the evidence that the NSW Environment Minister needs to take action to stop this cruel and unnecessary bulldozing in Leard State Forest.

Yesterday afternoon, Greenpeace Australia Pacific joined the blockade with an elaborate tree-top protest in the area threatened with clearing, which has remained in place overnight.

One protester was arrested yesterday afternoon.

Video footage of the forest clearing is available here: https://www.mediafire.com/folder/1bn9u4xj1ej9x/29th_May_2014

Photos will available throughout the day here: https://www.mediafire.com/folder/pncj24l8lvv00/photo