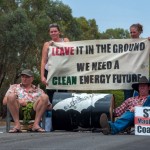 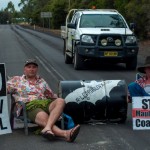 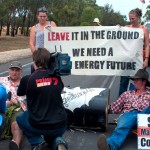 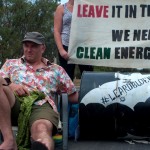 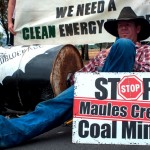 GUNNEDAH, 4 December 2014: Sustained protest against Whitehaven Coal’s controversial Maules Creek mine in the Leard State Forest continues this morning, as two men chained themselves to a concrete barrel at Whitehaven Coal’s Gunnedah coal handling and preparation plant. 31 year old Maules Creek farm-hand Adam Ryan and 37 year old, Sydney based father and corporate lawyer, Matthew Drake-Brockman have taken action to protest against what Drake-Brockman describes as the ‘lax approval processes’ that allowed the scandal-plagued mine to go ahead.

Mr Ryan, born in nearby Wee Waa, cited concerns about mining impacts on water and the subsequent effect on the local agricultural industry, saying “this mine is destroying the community that I have known my whole life. The time for standing by has passed, we have to stand up for our community.”

Mr Drake-Brockman was involved in a 2007 lawsuit against the then Planning Minister regarding planning approval processes, with the case focussing on the fact that the approval did not take into account the impacts of climate change.

Mr Drake-Brockman said, “The whole process between what goes on in parliament and what goes on in industry is not transparent – there is no way the public can know what’s going on. There is not a great deal of room for input from the public in this system – if there was we would already be moving away from coal and into renewable energy.”

Drake-Brockman continued, “It has become necessary that we all stand up and become citizen activists against the corrupt state government and Whitehaven Coal and to stand in solidarity with farmer’s, whose livelihood and health are under threat, and will only get worse with climate change.”

In the last week there have been 10 arrests including high profile former Wallabies captain, David Pocock, prominent local farmer, Rick Laird and IPCC contributing author, Prof. Colin Butler. The long running protest camp has seen thousands flock to protest the mine and over 290 arrests take place.

Leard Forest Alliance spokesperson, Phil Evans said, “Hundreds of Australians including doctors, professors, World War II veterans, sports players and young people have stood alongside local farmers and risked arrest to say that the Maules Creek project is wrong and should not go ahead. Surely, this sends a signal that something is broken with the way we decide on whether coal mines go ahead.”

“We need an immediate stop to work whilst there is a long, hard look at the planning approval process – so that ordinary Australians can have faith in their government’s independence from big coal and the big end of town.”

Whitehaven Coal’s share-price fell to new lows this week dipping to $1.07 on Tuesday.

UPDATE 4:30pm: Both men have been arrested and taken to Gunnedah police station to be charged.

Pictures and footage for media use: https://www.mediafire.com/#ir1c4tq4oncu2