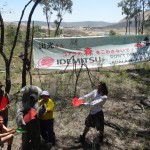 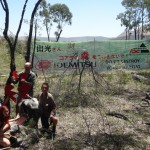 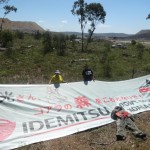 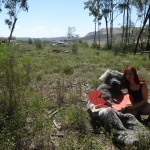 MEDIA RELEASE from Wando Conservation and Cultural Centre
Heart-broken koala lovers today protested on the eve of planned annihilation of up to 500 hectares of woodlands by coal mines at the Leard Forest, New South Wales.

“Boggabri Coal and its parent company the Japanese industrial conglomerate, Idemitsu Resources, as well as its financiers the Japanese Bank for International Cooperation (JBIC) have been responsible for the decline and near extermination of koalas in Leard Forest,” said Ms Pat Schultz of the Wando Conservation and Cultural Centre, Maules Creek.

“To obtain approval to mine for coal, Boggabri Coal and its advisers led the NSW Government to believe koalas were merely ‘transient’ and not resident in the Leard”, says Ms Schultz. “However this was, and remains, wildly incorrect.”

In September, academics and researchers from Japan’s Azabu University came to the Leard Forest, to ground truth statements made by Idemitsu Resources to the company’s Japanese financiers.

“I am very concerned about the plight of the koala, a threatened species which is very much loved in Japan and an iconic Australian animal,” said Mr Akira Harada, who is also Director of the Japan Tropical Forest Action Network (JATAN).

“The Leard Forest used to be a haven for koalas, but coal mining has made it uninhabitable for the creatures,” he said.

“The company has reported in Japan that all environmental approvals and conditions are observed,” said Mr Harada. “These statements appear to be misleading the Japanese market.”

“We learned last year that Idemitsu Resources was fined by the NSW Department of Planning for illegally clearing land outside of the mine’s disturbance limits,” said Mr Harada.

“It was the second year in a row that Idemitsu has been punished by the NSW Government for failing to observe its conditions of approval. This information needs to be disclosed to the mine’s financiers.”

JBIC has a A$500 million stake in the Boggabri coal mine.