IPCC contributor: “Australia in grip of coal frenzy” and participates in blockade of coal rail loader at Gunnedah 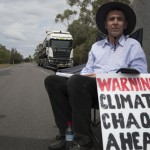 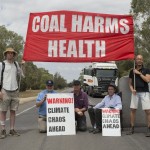 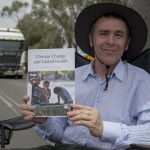 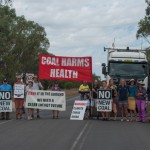 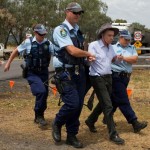 Around 20 anti-coal activists in the Leard State Forest, near Narrabri, are being joined today by an expert contributor to the Intergovernmental Panel on Climate Change. Professor Colin Butler appears to be the first current IPCC contributor[1] to have engaged in civil disobedience.

Professor Butler – an Australian Buddhist, a doctor and epidemiologist – is one of a number of religious protesters who will be involved in non-violent direct action today. They are blocking the gates to Whitehaven Coal’s coal rail loader at Gunnedah.

Professor Butler said, “Primarily I am going to fulfil what I see as my responsibility as a professor of public health in Australia, an incredibly fortunate nation that should not be so wedded to coal. Australia is in a frenzy with its expansion of coal mining and export. It is immoral that we are profiting from something that, in the huge dose we are administering it to the planet, is so obviously toxic to the future.”

“Coal causes health impacts at every turn. Workers and local communities are exposed to toxic dust, and pollution from power plants is causing premature deaths in countries such as China and India. There are the direct impacts of heat waves and super-storms and the indirect impacts such as changes in the incidence of vector-borne diseases. If not curbed, the longer term impacts of global warming will be far worse,” he said.

Whitehaven Coal share values have dropped from $2.03 in late August to $1.19 last week, according to Bloomberg Businessweek. The company has been plagued by declining international coal prices and protest activity over its controversial Maules Creek mine.

“Having considered the implications of climate science for public health for many years, I regret that more conventional ways to influence Australian opinion do not seem to be enough,” Professor Butler continued.

“With the sophistication and affordability of renewable sources of energy today, it would be madness not to use them. These alternatives lend themselves to small-scale, decentralised energy delivery systems which are more accessible to impoverished communities.”

Professor Butler is one of a number of Buddhists and Christians participating in protests organised by the multi-faith organisation, Australian Religious Response to Climate Change.

Uniting Church Rev John Brentnall said, “Like many other Christians, I interpret the word ‘neighbour’ to include not just the people who live next door but all of humanity. Not just the ones who are alive now, but the ones in the generations to follow. I also include all living creatures … By protesting about what is happening to the Leard Forest, I am ‘loving my neighbour’.”

UPDATE 11:45AM: Colin was arrested and taken into custody at Gunnedah Police Station.

UPDATE 2:45pm: Colin has been released and charged with Trespass and Intentionally rendering useless a road belonging to a mine

[1] Professor James Hansen, climatologist and former head of NASA, has been arrested on numerous occasions, but is no longer an IPCC contributor.