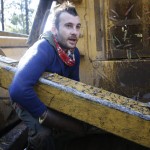 In what is heating up to be another intense week of protest, activists from Maules Creek have again stopped work today, with one person locking himself to a bulldozer. Scott Burgess, 37 has immobilized a machine that is clearing the Leard State Forest for Whitehaven Coal’s new open pit mine.

Mr Burgess, a small business owner, said “We need to think about the world we’re creating for our children; native flora and fauna is fast disappearing and we cannot push more species to extinction. This winter slaughter simply has to stop.”

Leard Forest Alliance spokesperson, Roslyn Druce, said, “it’s deeply disappointing that we must go to these efforts to protect Leard Forest because our governments haven’t. Where are Planning and Environment ministers Pru Goward and Rob Stokes? They have the ministerial power to halt all winter clearing immediately and cease this conflict.”

Last week Environment minister Rob Stokes expressed concern about Whitehaven Coal’s delay in submission of a Regional Biodiversity Strategy to mitigate destruction of the Leard State Forest, who was given 12-month extension on their deadline.

Ms Druce added, “What’s the point in having any offset strategy when it doesn’t have to be completed until after the forest is bulldozed? We call on ministers Stokes and Goward to immediately suspend all clearing in Leard State Forest whilst these submissions are still outstanding.”

There have been over 168 people arrested since January this year in the community-led campaign to try and stop the Maules Creek coal mine.