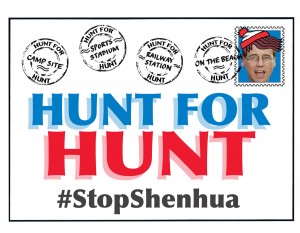 The Shenhua Watermark coal project on the fertile NSW Liverpool Plains represents a serious threat to farms, culture, habitat and the climate. Last week federal Environment Minister Greg Hunt approved the mine – larger than the city of Melbourne – and then went into hiding. No media release, and only one interview late last night where he said any dissatisfaction regarding the approval should be forwarded to NSW Planning Minister Rob Stokes. In true Abbott Government style – the coal-perational matters are too secret to discuss – even Barnaby Joyce (our unlikely ally on this) is conveniently barred from Q&A to discuss the matter. Once again it seems that coal and democracy are incompatible…

The approval for the mine came with many conditions, but how can we trust Minister Hunt to uphold these conditions, when he won’t even stand up and be accountable for his decision?

Front Line Action on Coal went on a Hunt for Hunt today at his electorate office in Hastings, Victoria. But he was nowhere to be seen. Can you help us find Minister Hunt? 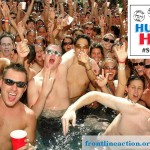 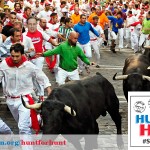 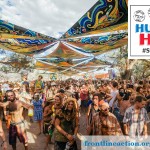 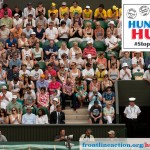 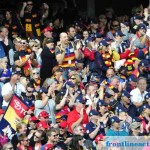 All jokes aside, we are seriously concerned about the approval of the Shenhua Watermark mine – we need to let Greg Hunt know that he made the wrong call, and that it is not too late to change his mind.

1. Call, email and tweet to Greg Hunt telling him that you are unhappy with his decision to preference coal over farms, Gomeroi culture, Koala habitat and a safe climate.

3. Spread the word – tell your friends and family about the Shenhua Watermark project, why you think it is wrong, and ask them to be a part of the movement to stop this mine from going ahead.

Watch this space as this campaign unfolds. The local Caroona Coal Action Group are no stranger to blockades and FLAC stands ready to support Gomeroi traditional custodians and local farmers in this fight. 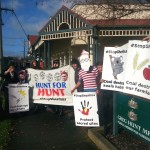 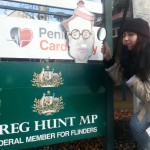 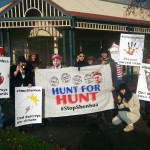