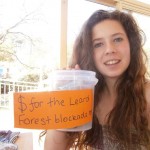 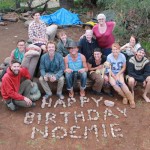 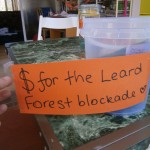 We were very excited to receive a $450 donation from Noemie Huttner-Koros yesterday. What makes it so special is that in lieu of receiving presents for her 18th birthday, she asked her friends and family to support the LeardBlockade. We wish you a very happy birthday Noemie and thank you for your selflessness. Here is her story…

2 weeks ago I had my 18th birthday party. I was really super excited because a bunch of awesome people were coming to celebrate life and happiness and music. Instead of people bringing presents I asked them to donate to the LeardBlockade to stop the Maules Creek Mine. Over the past year I have been hearing more and more about the battle against the Maules Creek coal mine to save the Leard State Forest. Earlier this year my brother was one of 100 people arrested during a non-violent direct action to stop Whitehaven coal destroying even more of the forest. Because I wanted my birthday to be a celebration of life, I thought an awesome present would be ensuring there is still this beautiful planet and a safe climate into the future.

The fight to save the Leard State Forest is such an important one. It has brought together hundreds of people from  farmers, to traditional owners, university students and a 92 year old Kokoda veteran (!) and people from communities all around Australia. The Maules Creek coal mine is set to become the largest coal mine in Australia contributing the equivalent of New Zealand’s total yearly emissions. I have been volunteering with the Australian Youth Climate Coalition for the past few years and I know in order to have a liveable world we need to do everything we can to fight against the influence of the fossil fuel industry and from new mines being built. The Maules Creek mine will also destroy the Leard State Forest, ripping up the precious ecosystem of box gum woodland, the largest remaining woodland of its kind on the Liverpool Plains. It will threaten farmland and endangered species such as bats and koalas. Earlier this year traditional owners came to Canberra to communicate their story to environment minister Greg Hunt. We had a picnic at the Aboriginal Tent Embassy and we heard that Whitehaven Coal has destroyed Aboriginal sacred funeral sites that were thousands of years old. We need to be part of this social movement to stand up to the fossil fuel industry. It’s really vital that we hear the stories of those on the front lines of this fight as we support them in whatever creative, imaginative and useful ways we can.

It’s so important we stand by the people at the LeardBlockade and show that we are thinking of them and all the hard, amazing work they are doing. I can’t wait to go up to the Leard Blockade and meet everyone who is working very very hard to stop this mine. People are resisting every day and I was very excited to be able to do a little bit to save the Leard.

‘We all have a duty to disobey unjust laws.” Martin Luther King