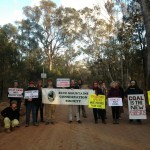 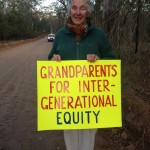 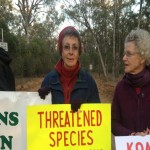 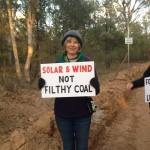 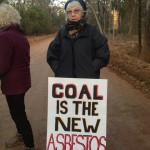 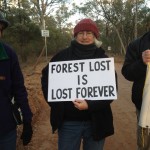 The Leard Blockade continues today with a group of concerned citizens from the Leard Forest Alliance and Blue Mountains Conservation Society blocking access to Whitehaven’s Maules Creek Mine Site. Fourteen people are preventing trucks from entering the premises as an expression of distress regarding Whitehaven’s destruction of the Leard State Forest, and are calling for an immediate halt to work.

Speaking from her place blocking the road, Blue Mountains Conservation Society spokesperson and grandmother of 8, Robin Mosman, 73 said “We are taking action today because we are deeply concerned about the impact Whitehaven’s clearing is having on native fauna and flora. Additionally, as conservationists, we are extremely concerned about the effect of coal mining on climate change”.

The Leard State Forest contains the largest remaining intact area of critically endangered Grassy White Box Woodland on earth. Great controversy surrounded Whitehaven Coal’s clearing of it in winter, which abruptly stopped due to the pressures surrounding a court case. Construction blasts at the site however have been ongoing, with Operational blasting expected to commence this week.

Leard Forest Alliance spokesperson, Elise Chatterton, said “Continued obliteration of Australia’s precious forests is simply unacceptable. With every day that passes, new revelations come to light about this increasingly tainted company. Just this week, an engineer working for Sedgman LTD, the company constructing the Maules Creek mine, was found to be phony. We are calling for an immediate stop to all work, pending a proper investigation into Mr Shirtcliff’s involvement into the construction of this mine.”

Ms Chatterton added, “Blasting near habitat trees during winter nullifies Whitehaven’s agreement to postpone clearing until after September in order to protect native wildlife. It’s totally unacceptable and extraordinary; another example of Whitehaven bending the rules for their short-term profit. We won’t be going away. This battle is going to keep on raging.”