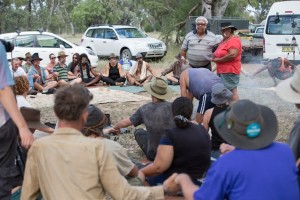 Gomeroi Traditional Custodians were today joined by concerned locals and supporters near the gates of Whitehaven’s Maules Creek Coal Mine in the Leard State Forest for a traditional ceremony.

The Emu Ceremony was supposed to be held at the Gomeroi sacred site, Lawlers Well, the last remaining of 11 sites in the forest. Sadly, yet unsurprisingly, Whitehaven authorities did not provide a permit for the Gomeroi to access their own land, and the site that is earmarked for clearing.

Roughly 80 people were there to show solidarity to the mob who warmly welcomed the larger community to attend the ceremony. Uncle Neville and his sister performed a Welcome to Country and Smoking Ceremony in their own language, igniting emotions about the devastation and loss this community has faced from the mining projects and the threats these clearings pose to the rich Gomeroi culture and heritage.

#gomeroi elders have been waiting for over 2y 4 @GregHuntMP to respond to application to protect sacred sites pic.twitter.com/A9uxfGlC13

The community has been working tirelessly for years to have their concerns heard, and to have Lawlers Well protected as a culturally significant site after all other sites in the area have already been destroyed by the expanding mine. Community members have been sending in hand written letters and applications for Sections 9 and 10 of the Aboriginal and Torres Strait Islander Heritage Protection Act to the Federal Environment Minister Greg Hunt. The applications have so far been ignored by Minister Hunt’s office. 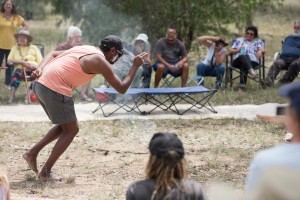 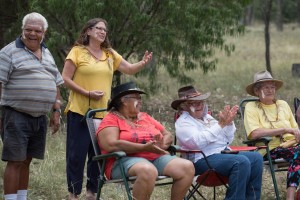 Today also marks the first day of 6 weeks of clearing approval that has been granted to Whitehaven Coal by the NSW state government, that will threaten Lawler’s Well despite these ongoing concerns being raised. Strong unity and decision-making has been created between Gomeroi elders and FLAC activists over the time of the campaign and a deep relationship continues to develop.

The Gomeroi’s message was clear: culture and heritage needs to be protected, which relies on the conservation of land, water and Country.