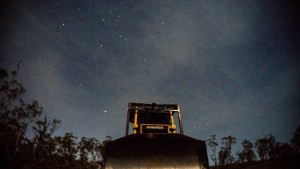 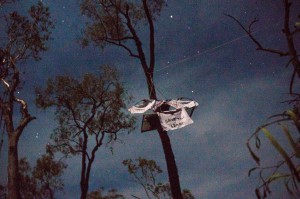 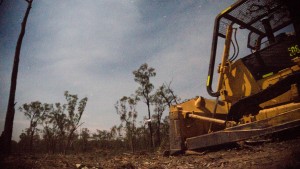 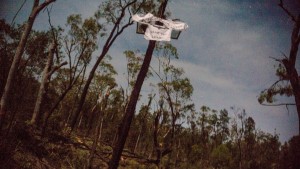 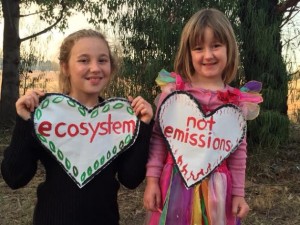 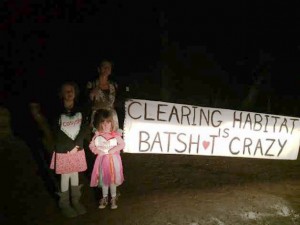 Despite both major parties affirming their commitment to the coal industry, the NSW public continues to show their strong opposition. This morning forest clearing at Whitehaven Coal’s controversial Maules Creek has been disrupted again.

As a young family blocks a road outside, 20 year old Ruby Everett is the latest to halt the machines by suspending herself from a tree and tying it off to a bulldozer in the Leard State Forest. In three weeks since the opening of Whitehaven’s forest clearing window, there have now been over 40 people arrested disrupting the clearing.

Ms. Everett said “There has to come a time when the politicians in this state and this country take a stand against the destruction of mining. For the communities and ecosystems already lost to mining, there is no more time. But to preserve what we still have, and to fight against catastrophic climate change, it is our duty to put an end to this.”

The action is just the latest in a two and a half year struggle from local farmers, traditional custodians and environmentalists to stop the Maules Creek mine. It also comes at the same time as the Planning Assessment Commission recommends the approval of Rio Tinto’s Mt Thorley Warkworth mine expansion, another controversial project which threatens rural community and endangered ecosystems at Bulga in the Hunter Valley.

The Mt Thorley mine has many similarities to the Maules Creek project; with controversy surrounding the ecological offsets, suspect links between mining company and government, and a local community under threat who have said they will resort to peaceful direct action to resist the mine expansion.

Leard Forest Alliance spokesperson Andy Paine said “Both sides of NSW politics have shown that they will blindly support the coal industry, no matter how destructive it is. The Mt Thorley mine expansion has been rejected twice in the courts, is opposed by a local community whose very existence it will destroy, and is based on lies about the price of coal and the mine’s biodiversity offsets. Yet its being recommended for approval and Labor hasn’t said a word against it. If Luke Foley is serious about protecting communities and the environment, we call on him to support the people of Maules Creek and Bulga and oppose these mines.”