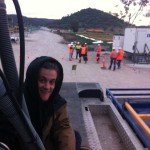 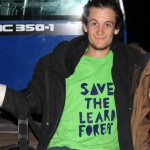 Environmentalist Sam Hagen, 25, and  social worker (name removed) both from Queensland, have chained themselves to construction equipment, immobilising a crane at Whitehaven’s ongoing rail spur project that will be exclusively for the transport of coal.

Mr Hagen said “Unjust projects are approved by the greedy few, but paid for by the vast majority. This mine is without integrity to the core, from the immediate community that it impacts to the larger picture of climate change that it will exacerbate.”

Whitehaven Coal has just been subject to a two-week investigation by the EPA, regarding concerns over blasting practices and their impact on local residents and dwellings.

Spokesperson for the Leard Forest Alliance, Helen War, said “We’re calling on the Baird government to halt construction on the mine to allow for a full investigation of this scandal-plagued project.”

“At what point will this destructive industry be held to account? We need a Royal Commission into the approval processes of coal mining operations, in order to shine the light on this disturbing Maules Creek project, and stop future projects proceeding with such reckless abandon.”

There have been 229 people arrested in the Leard State Forest and surrounding mines since January this year.