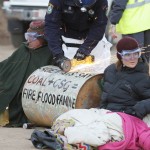 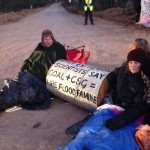 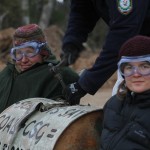 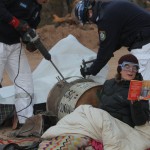 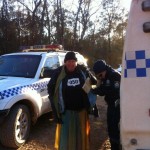 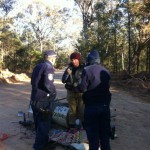 In a second day of action, protesters have blocked the access roads into Whitehaven Coal’s Maules Creek mine in the Leard State Forest calling for an end to the controversial mining project.

Among the protesters today is 53 year-old farmer Annette Schneider who is chained to a barrel filled with cement blocking a road.

Leard Forest Alliance Spokesperson, Helen War said, “this project has no social license. The community here has depended for generations on agriculture, and the water that feeds it, as a way of life. The threat to the aquifers that this mine represent will destroy that way of life forever. Water is more valuable than coal.”

The alluvial aquifers in the Maules Creek and surrounding area may drop up to 2m as a result of the mine.

Ms War added, “We are calling on Premier Baird for an immediate halt to all work on this projects, and for a Royal Commission with powers to look into the approval process that gave us the Maules Creek mine. It is time for this government to prove it is not just business as usual for miners, but time for a fair go for farmers.”

UPDATE: Police rescue are on site cutting into the barrel.

UPDATE 8:30am: Both protestors have been arrested and taken into custody.

UPDATE 12pm: both have been arrested and charged.